Goyt Valley is situated very close to Buxton. The race starts and finishers close to Errwood Sailing club with the route being a figure of eight, one loop circulating around Fernilee reservoir.

Travelling there on Saturday morning was quite worrying for me as the overcast skies gave way to flurries of snow and hail, the landscape white over. It was going to be a cold run. My reservations were due to just getting over an illness.  I ended up convincing myself that should it be necessary I would walk part of the route.

Registration was simple, bibs collected, and entrants took a short walk to the start line.

The first mile or so, took us all around part of the first loop. The trail was a flat, gravelly path, though due to the recent weather, there were puddles of water/mud, too many to try and avoid. A weak sun came out but it managed to take the frost out of the air. Running was a little easier.  After crossing the figure of 8 centre, and into the second loop, the terrain changed and started with a short sharp incline, this headed towards a small village and church, where there was a water station.

A sharp turn right at this point led to a section that consisted of narrow trails, rocky paths small bridges and stiles to climb over.  This section was in particular fairly slippy underfoot. The marshals were called upon – a few tumbles and accidents occurred.

At approximately mile 4/5 the route led us all onto what appeared to be a long, winding incline, that seemed to go on forever. Information about the route states over 900 feet elevation, it felt like more!

Have to say I had a short walk at this point – but wasn’t the only one!

The incline ended unexpectedly and this brought us back to the centre of the figure of 8 again, over the footpath and into a wooded area, care needed to navigate the tree roots, stones and steps which were partially hidden with fallen leaves etc.   A small, steep slope then led to a grassy bank area at the side of the reservoir, where the finish line was in sight.

No medals at the end but a finisher’s mug (complete with tea bag, coffee sachet and biscuit) was issued.

The race was low key but friendly and well marshalled.  Personally I felt that the Tuesday morning Striders (Millhouses) group would love this.

The down side was that no one appeared to know about any presentation and as most people were leaving I went home too.

Well done Mandy! – the sole Strider at this event. 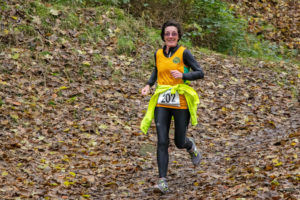