This was the 34th running of the Grasmere Gallop, described as a trail run “set amidst the stunning surroundings of Grasmere village and Rydal Water”.  This is a lovely little event, organised by the National Trust in aid of the local red squirrel population! They offer a 5km, 10km or 17km option plus a “teddy bear dash” for the under 5’s.  I did the 17km and Dean Young represented Striders in the 10km.
There is a mass start for all races after gathering in the sports field to be led to the start by a Cumbrian piper. This led to a nice relaxed start and a very friendly feel to the event. It was hard to know how may people were ahead of you due to the mass start and who was on which course, but it didn’t really matter. The weather was overcast but warm which meant it was humid, making the four water stations on the 17km very welcome.
The route was well signed and marshalled and on trails and tracks with some road sections. The descents were a bit more technical on the 17km with some rocky areas and some rooty parts, but still very runnable. With 500m of climbing and some steep gradients on the 17km it was not an easy course. I struggled a bit to get going and found the steeper gradients to be tough after spending the spring running on flat roads, but enjoyed and caught several runners on the long descents.
I would thoroughly recommend this to anyone looking for a low key event in the Lakes.
Dean and I met just before the race and as far as I could see no other striders were present. The results don’t show club affiliations so apologies if I missed anyone!
10km Winner Mauro Lanfranchi in 37min 03, female winner Nadia Shaw in 44min 41.
17km Winner overall was Lizzie Browne (sometime of Sheffield?) in 1h11:06 and male winner was Ben Martin-Dye in 1h13:40.
Full Results here 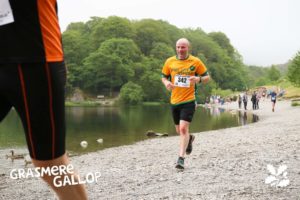 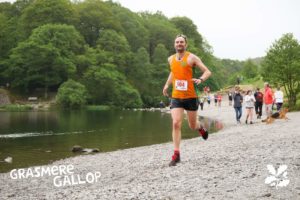