The Great North 10k is an unofficial warm up event for the Great North Run in September. At around 5000 participants it’s a good size race, very well organised and the local support is amazing, very few parts of the route are lacking in supporters cheering you on.

This was my third attempt at this race which starts outside Gateshead International Athletics Stadium, goes down to the picturesque Newcastle/Gateshead quayside, under the Tyne Bridge and back along the quayside before returning to finish inside the stadium itself where friends and family can watch from the stands and cheer you over the finish line.

Newcastle is my home town so I always enjoy this race, my only complaint on such a hot day was that there was only one water station at 3km so a lot of runners were quite dehydrated by the end of the run.

The atmosphere has always been very upbeat and this was more pronounced than ever this year given that it took place the day after England’s world cup quarter final victory. Every year the local fire brigade provides showers around the route which was especially welcome this year given the warm temperatures.

The race was won by Chris Steele in 33:16 and first female was Gemma Steel in 35:22. I was the only Strider according to the official results (unsurprising given the distance from Sheffield, the Leeds 10k was on the same day and much closer to home). 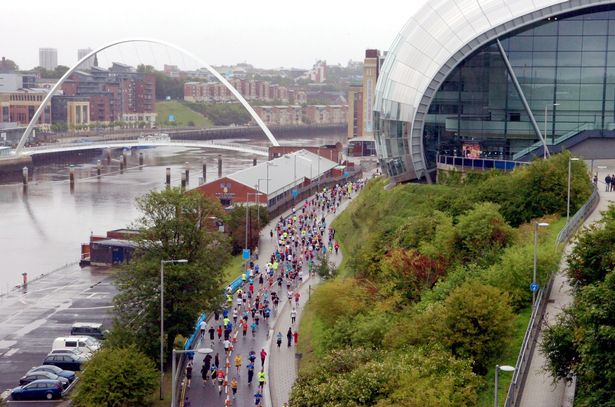