The race terrain is a mix of rocky paths and open exposed peat fell – The first section is a climb out of Langsett up to Mickleden and Cut Gate where the route then leads onto open fell tops – this is an exposed section running across well worn peat pathway/lines. After the decent from Swains Head CP the final section has a few short climbs then gives a fast home run across grassy moorland and woodland tracks.

This was my first attempt at this fell race which was pretty local for me. No other striders appeared, perhaps due to this being the same day as the Worksop half marathon, but I knew some of the Dark Peakers there. Visibility was good so navigation was not the problem that it could have been – some of the route is on fairly tenuous trods. The route is advertised as 25K so I was expecting 15.5 miles which psychologically made the last “extra” mile even harder! The race was included in the Accelerate gritstone series as one of the “long” events.

The race was won by Tim Street of Holmfirth in 02:14:04 and Majka Kunicka of Dark Peak in 02:25:49 (more than fifteen minutes ahead of the second lady). There were 132 finishers including: 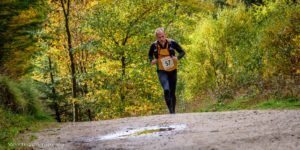 on the last weary mile