On a lovely sunny Sunday morning in Halifax, (or “Hillyfax” as I will now know it for the rest of my life) I ran a poorly organised marathon.

The race briefing began at 9.58am, in which all we were really told is that there were yellow arrows (which were almost no bigger than a credit card) placed on lamp posts and fences at certain junctions to point us in the right direction, as well as only three water stations and NO marshals or medics. Two minutes later the gun went off and away we went, setting off from Dean Clough Mills. This was a two-lap course with approximately 200 runners, some doing just the half marathon and about 80 of us doing the full marathon. The sun was already out and there were no clouds in the sky. Temperatures were already in the late teens.

Out of the car park we went and then bang!! A massive hill. Stupidly I hadn’t checked the elevation chart prior to running but as soon as I saw the first hill I knew I was in for a tough day.

The lap contained very few flat sections, with the majority of the first 8 miles being Hagg Hill/Langsett Avenue style inclines going on for a mile or so at a time before a few hundred yards of downhill followed by even more uphill. After eventually reaching the top of what felt like the world it came as a great relief knowing that from there it couldn’t get any worse over the next 5 miles…until the start of the second lap.

Without going on too much I can honestly say this was a massive challenge and I had thoughts of just giving in at the halfway point but stubbornness got me through it in temperatures peaking around the 27 degree mark.

The event was organised by a group called “Team OA”. If you intend to run any of their events I would strongly recommend hunting through the internet for reviews from past participants. I doubt you will find many positives and it may save you from paying for something you probably won’t enjoy! The medal was terrible but the t-shirt was ok.

4 hours and 31 minutes of pure joy gave me a 21st place finish, with the winner doing it in 3 hours and 14 minutes. Only 57 of the 80 marathon entrants finished. Only seven got sub 4-hour times and last place came through in 8 hours and 25 minutes. This is definitely not a PB potential course!! But if you are a budding photographer there are some cracking shots to be snapped when you reach the top. I can highly recommend this race for the latter reason only.

57 runners finished the race, which was won by David Smithers of York Knavesmire Harriers in 3:14:34. First female was Rosalee Ross (unattached) in 4:07:47.

Full results can be found at: http://www.whiterosemarathons.co.uk/halifax-results.html 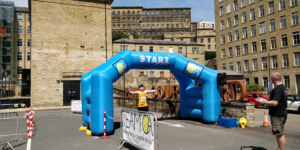