Maybe you’ve already seen the photo and the results, but did I tell you that I won the historic Hallam Chase this year.  Well, just in case you didn’t, here’s the news. The organisers must have been feeling generous towards me and my plateauing race times and decided to gift me a very generous handicap of just over 13 minutes on the night, meaning that I had every opportunity to come home first, and I did! Cue a massive cup and much outrage from fellow Striders about my luck/gaming of the system. But let me be clear, I was honest in my submission of race times from this year’s races, honest! Perhaps I protest too much. On the other hand, I’ve been informed that it could be so expensive to have the trophy engraved with my name that the joke’s on me for thinking that winning was anything but a costly mistake.

Really, though, I’m charmed. And, humbly, I admit I was very lucky with my favourable starting position.

Hang on, what’s he on about, and what’s The Hallam Chase, you ask? Well, the course is 3.25 miles with 800’ of the climb; an out and back from the cricket ground to the church gate at Stannington. Records go back as far as 1862. The men’s record was set 50 years ago in 1968 by Trevor Wright (19:42), which is exceptionally quick and there are strong doubts it will ever be beaten. Why wasn’t this year’s race called the 50th anniversary of an untouchable record? Perhaps it was and I never noticed. The ladies record is held by Jessica Turnbull in 24:22 (from 1998).

The fell race is always on the Tuesday evening after the second bank holiday in May, starting at 8 pm from the Hallamshire Cricket Ground. It is open to male and female runners from South Yorkshire road and fell running clubs, under a handicap system: tortoises off first, whippets last, with the aim to all finish together. There is a huge amount of heritage relating to the event and it is a cherished local tradition. It certainly warrants better attendance from all local clubs, with only 58 competitors appearing on the night. Why not try it next year? Bear in mind, the less whippet-like your race times, the better your handicap. Chase runs (ideally, if the handicap is, ahem, ‘fair’) level the playing field and is a lot of fun.

Apparently, it is the oldest continuously run the fell race in the world. And this was firmly in my mind as I considered giving in as my legs turned to concrete up the final off-road climb of Den Bank. I overheard that there were only two runners ahead, and I’d had enough of Colin Hardy’s heckling from behind, so I begged my body for some more efficient lactate shuttling and gutted it out for the win. Ensure celebratory scenes of two men with clipboards jotting down my time at the finish line.

Elsewhere, there were a number of notable Striders’ performances on the night, including Colin Hardy in second place overall and first V40, Caroline Brock fighting against a punitive handicap to get into 3rd women’s place (or second place, as the first placed woman entered on the day and so didn’t count as a winner (I know!)) and fastest female, Lucy Broom first FV40, and Michael Twig vying for a return of the winner’s cup in 5th place overall.

Nick Barber of Hallamshire Harriers was fastest not taking handicaps into account in 23.56

Sarah Milnes of Kimberworth Striders was first (none scoring female) in 42.09 (34.09 actual)

28 Striders competed, here are their results: 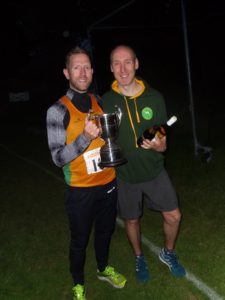