It was a great experience in terms of endurance.

As I arrived in the semi-darkness at Robin Hood’s Bay you could see the weather was going to be beautiful. Part of me was delighted, yet the other part of me knew that the 5 degree C temperature meant that the Cleveland Way would essentially be a mud bath.

I registered, caught up with a few Hardmoorian mates and did a final kit check. (The kit that got me though this race were Sealskinz socks, Injinji toe socks, my Ron Hill waterproof and Mountain Warehouse gloves.)

The Hardmoors 30 route is on 2 well known paths. The ‘Cinder Track’ and The Cleveland Way. You do a loop down to Whitby and back then another loop taking in Ravenscar and Heyburn Wyke.

The sections to Whitby on the Cinder Track was great. I didn’t even mind the trot up the Abbey Steps. But The Cleveland Way was another story. John Armitage who also ran that day described it  as ‘Game Show Mud.’ It really was. I had 3 falls; 2 were okay but one really winded me. I kept going and decided that I hadn’t hurt anything other than my pride. The group I was running with headed back into the checkpoint at Robin Hood’s Bay where several people DNF-ed due to the underfoot conditions. I grabbed some savoury food, topped up my drinks and resisted the temptation to stay in the warm.

I headed back out back onto the Cinder Track in the other direction. This was a long, uphill slog but it was great underfoot!

It was lovely seeing people I knew marshalling at Ravenscar. I was dreading the coastal section on the way back and I was right to dread it. As I headed back onto the Cleveland Way it began to rain and a westerly wind picked up. There were points when I was on a trail of pure mud with a sheer drop below me and the wind was blowing me towards the sea. Having fallen already, I took it really steady. The section back to Ravenscar seemed to take forever. The sun set. Headtorch on. Time was ticking away. I was much slower than I had hoped due to the underfoot conditions.

I took a deep breath at Ravenscar, gave myself a good talking to and headed out for the final 5.5miles. It was the dreaded Cleveland Way, yet mainly downhill. I picked up the pace and put all the downhill technique I could into this section. I overtook 6 people and made up a lot of lost time.

I got back within the cut off and then spent 27 minutes trying to surreptitiously get changed in the back of my car. With hindsight, this extreme form of yoga prevented me from stiffening up too much, so I may repeat this workout…

Would I do this race again? Probably not. The only scenario I’d do it in would be if I knew for definite I was going to do The Grand Slam.

Would I have believed 5 years ago that I’d have revelled in a New Year’s Eve of no drink and kit checking? Definitely not. I’m glad I did it and it was a great way to kick off 5 months of West Highland Way training.

The race was won by Ben Shacklock of Harrogate Harriers in 4.19.43. The first woman was Emma Lavelle Wood of Kirstall Harriers in 5.16.20. There were 188 finishers with a few DNFs. 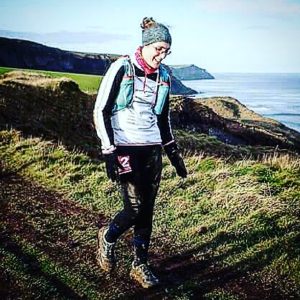