A couple of days before the race someone was unable to take part and was giving his number away. When I saw it was the number 94 and I had to have it. After clearance from the Sheffield Tri Club Committee I was allowed to race it twice!

I jumped in and started a couple of seconds behind but that was fine. Swim was steady then I rushed transition, resulting in 15 seconds in the penalty bin for cutting a corner. Off on the “Hilly” bike route with the ascent up Froggatt as the centrepiece. With gritted teeth and staying in the small ring I was able to get to the top, where I was joined by two fellow Striders. What comes up, must go down and that we did. 20 minutes of freewheeling back into Hathersage Centre through traffic and other competitors followed as we made it to T2.

Now for the “Hilly” run and the infamous Ski Slope.  Cross the bridge, across the field, through the woods and up the Ski Slope. For anyone who hasn’t tackled the Ski Slope, it is a rocky climb where using your hands is recommended. Once at the top, you get to run along the old Copper Mill before what can only be described a free fall through the long grass towards the end of the race.

The final 100m of the race is through the Finishers Field where spectators happily cheer on everyone coming past. I cross the finish line and run straight to T2, drop off my shoes and get back on my bike to cycle back to T1.

Take Two – 20 mins rest between races was spent in the shower wondering why I would do this to myself. Half for the charity element and half for the part of me who likes a challenge. Second time lucky they say, a good swim and a legal transition meant I was already a few minutes ahead of my morning race. Off on the bike and leaving it all out there I went up Froggatt in the big ring determined to make up more time. This time no Striders at the top, just a Tesco Delivery Van…who was kind enough to let all the other cars go first. I wasn’t annoyed….ok maybe a little.

Back into T2 and I was now 12 minutes ahead from the morning and feeling good. A few heads were scratched as the volunteers asked “Have we seen you already?” With a smile I set off on the run at a good pace, feeling confident that I could shave even more time off. That feeling lasted about 2 seconds into the Ski Slope where I proceeded to climb very slowly with a tear in my eye and intense pain in my legs.  The pace dropped off so my thoughts went to the finish line and the sports massage waiting for me there. I muddled through the last 2km and crossed the finish line. Job done. Now for that massage.

If you think that’s worth a couple of quid for the Alzheimer’s Society, please head over to www.justgiving.com/Nasser94 or text NASS94 £2 to 70070.

Full results can be found at https://www.stuweb.co.uk/race/1Y4 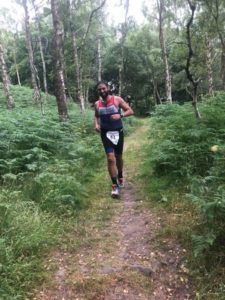