A beautiful day dawned for The Hathersage Hurtle, a 20 mile race covering a fixed route in the Hope Valley with a mere 2,500 feet of ascent. This event is open to walkers who start from 8am and the mass start of runners at 10am.

I was there early (as always for my ‘day out’)  and began to wonder whether I should help put the tent up! However, as the sun rose other Striders arrived and the chatting began, which evolved to become the feature of the day. My report is one describing what it’s like to run, walk at the rear of the field.

The first hour or so, we just all settled in and there was not much chatter. As we climb up and over Shatton edge I saw a group of 5 runners in front of me take a right at Wolfs pit, although I thought it was a bit odd and not the advertised route, I followed anyway, to only uncover that they were just taking a photo!

Back on the course, there was a small group of 5 of us who began to chat along the way when we kept ‘leap frogging’ each other and passing the time of day by admiring the views and considering each other’s welfare. After about 2 hours, I began to wonder of the time  ( as I don’t wear a watch)  and using myself as a sundial, I spent the next few miles assessing the time as I watched my shadow as it shortened and made the assessment that time must be moving to midday or just beyond midday.

A short time after this I found myself on a long flat trail and I was chatting to a lady from Dronfield who had just moved to Sheffield and was considering joining Steel City Striders and one of the unofficial headtorch runs. We chatted for a while about different Strider venues and group paces until I was struggling to chat and to keep up with her, and told her to run on, and with a cheery ‘I’ll see you later’ she quickened her pace and sped off.

While walking up a tarmac road (one of many) I caught a glimpse of Stanage edge on my left as we rose. At this point, I was chatting to a lady in a pink top and we discussed whether we should start running as the terrain had flattened off? But after a few strides we decided against this and just enjoyed the views and walked at a somewhat leisurely pace.

Climbing onto Stanage Edge, my legs were beginning to feel tired and I struggled to keep up with people in front (no chatting going on at this point) but still running with the lady in pink. Down off Stanage edge and down onto Burbage Bridge and I was feeling quite comfortable as I was ‘on my way back’ and still running with a small group of people and going downhill (always good)

‘Racing’ down Burbage my legs decided to come to a stop but they didn’t convey this to the rest of my body and I stumbled and fell.  The small group of runners asked if I was alright, which I was, and I picked myself up. Moving onto Upper Padley, I could see a few people in front of me and several behind me. However, to quote Nick Burns, Upper Padley was like ‘Blackpool beach’ and I found myself picking my way through the crowds of sun worshippers and children playing.

Soon I found myself at the gate to go down though Padley gorge and at this point I was running on my own, no lady in pink shirt or any other runner to be seen. Running down Padley (the slowest that I have ever ran down) I saw no one either in front or behind me and if I wasn’t sure of the route I would have thought I was lost.

I ran down into Grindleford to be met by a marshal who pointed me on my way. Here  I was thinking, ‘yes! Grindleford, nearly finished! then realised that the start and finish was Hathersage!’ I followed the ‘flags’ to the bridge where the route map had directed  to cross, only to be told by the marshal that I could go that way if I wanted to but the flags had been moved so I had a choice of routes to follow? So I headed uphill to follow the flags and marked route.

Again, I found myself on my own with no one in front or behind me and was starting to think that I was on the wrong side of the train lines. Some short time later, I came to a marshal who told me to follow the path down and run alongside the river. I was still on my own and constantly looking back for signs of anyone else, it gladdened my heart when I passed some walkers with race numbers and with some relief I continued on. I then passed a man clapping and telling me that there was only 500 metres to go and I remember thinking, ‘500 metres? 3 minutes? But maybe more like 5 minutes’ as it turns out it was much less than 500 metres as I rounded the corner and saw the field to the finish, and it’s always lovely to be cheered on by fellow Striders as you race to the finish line.

My time? I had no idea, but I caught a glimpse of a watch which said 2.14pm so I was guessing a time of outside 4 hours! Happy days!

All in all a really lovely day, will I be back next year? Probably ‘yes’, it was fun, for the sheer pleasure of running and loving the outdoors and the beautiful scenery in our ‘Back garden’

Congratulations have to go to Striders who won prizes, Phil, Caroline, Fran and the lovely ladies who won ice creams, Mia, Heather and Rosa.

The men’s race was won by Mark Anderson in 2.21.24 with Phil Skelton just being pushed into second place. The ladies race was won by super Strider Caroline Brock in 2.21.14 – another amazing performance from Caroline, well done. 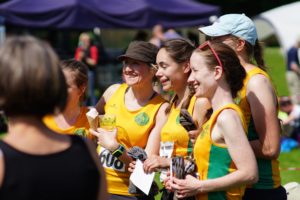