It’s billed as “Britain’s Toughest Half Marathon Challenge”, and makes a big selling point of features like Lucifers Lido, the Bog of Doom, and Hell’s Hills. “Hell Up North Half” definitely isn’t a normal trail half marathon! I admit I’m sceptical about these sorts of races, especially at £40 entry fee, and wouldn’t normally bother with them when there are some great “traditional” trail half marathons available at far better value for money (Wharfedale, Snowdonia, or any number of Hardmoors events). However this was done as a charity event, organised by a group of people at work and I thought it would be a good day out, and for a good selection of local charities too. With this approach, it makes a lot more sense, tackled as a group event with the race time being less important, and it seemed to be most popular with groups of friends or corporate groups like ours. The race itself is a bit of an odd half-way house between a trail race and an obstacle race. It’s definitely not one to worry about your time, as the 3 or 4 main obstacles can be a painfully slow procession through the freezing cold 5ft deep bog, and with 1250 runners taking part there are some big bottlenecks at times. The obstacles (named Lucifer’s Lido, The Bog of Doom, hells hills etc.) weren’t really difficult, just time-consuming and very cold. The worst aspect (aside from the chance to catch leptospirosis or E Coli) is the effect of the cold water causing your leg muscles to seize up quite badly so it can take a few minutes to get them moving properly again after exiting the various rancid swamps! Obstacles aside though, it’s actually a really good trail running route, and without the bogs, it would probably be very similar to the Sherwood Pines trail races.

Overall it’s an enjoyable, if slightly expensive, group event. Definitely worth leaving your Garmin or Suunto at home and just enjoy it for what it is. Oh and definitely take a towel and a complete change of clothes! 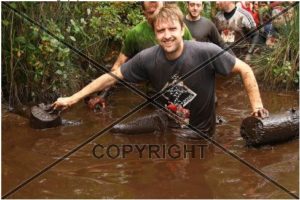