Sunday saw the annual running of the Helvellyn and the Dodds fell race organised by Keswick AC.  The race starts at Threlkeld and follows an out and back route taking in the summits of Clough Head, Great Dodd, Stybarrow Dodd, Raise, Whiteside, Helvellyn Lower Man and Helvellyn. A distance of 15.5 miles with just under 5,500ft of climb.

A few years back, I learned the hard way about the quality of runners in Lake District fell races when I achieved last place at the Steel Fell race.  Having registered at the Threlkeld Cricket Club pavilion, I nervously surveyed the assembled runners the way an injured lioness might survey a herd of gazelle, hoping to spot at least one or two that I might have a fighting chance of catching.  It wasn’t looking good, there was a large representation of runners from the top fell running clubs, Keswick, Borrowdale, Clayton-Le-Moors etc. who were looking like they meant business.  I decided it might be wise to start towards the back to avoid being stampeded on the short road section at the beginning.

It was a very warm day and there was very little in the way of cloud cover.  We had been warned that there was no water provided on the route and that there were no natural water sources.  With this in mind, I was carrying 2 litres in my backpack bladder and an additional 500ml bottle.  Looking around, I noticed that most of the gazelles were carrying next to nothing which led me to believe they were expecting to be re-hydrating in the cricket club bar long before I got back.

The first climb up Clough Head is brutal and relentless, climbing 1,800ft in about a mile and a half, 30 minutes of staring at the heels of the runner in front.  From the summit of Clough Head there is a long run down and then up via Calfhow Pike to Great Dodd and then skirting the summits of Watson’s Dodd and Stybarrow Dodd before dropping down to Sticks Pass.  This is followed by a long rocky slog up to the summit of Raise.  We had been warned at the start that it was a bit ‘breezy’ on the tops and it was at this point that I noticed the wind starting to get up.

After Raise, the route drops down again before yet another ascent up to Whiteside.  It was at this point on the out and back course that the leading group of three Keswick AC gazelles, led by the eventual winner Carl Bell, came bounding past me.  The athleticism of the top fell runners on these steep, technical descents is truly a sight to behold.

From Whiteside, there was a relatively short climb up to Helvellyn Lower man and then up to Helvellyn summit and the turnaround point.  At this point the wind speed had really noticeably increased and there were some incredibly strong gusts.  On the descent from Lower Man I passed several people lying prostrate on the ground to avoid being blown off their feet.  It was still incredibly clear and sunny though, and the easier downhill running allowed some time to take in the majestic views to either side of the Helvellyn range.

Approaching the summit of Clough Head I remembered that what goes up must come down and that tortuous steep climb was going to have to be done in reverse on tired legs.  In the event, I found the descent really enjoyable once I found my rhythm, being exhilarating and terrifying in equal measure.  From the foot of Clough Head, it was about half a mile on tarmac back to the finish.  Thankfully, the gazelles don’t seem to eat all that much and had left plenty of cakes and sandwiches in the cricket pavilion for me.

All in all it was a very enjoyable day out.  A well organised and friendly event, a truly beautiful route incorporating some of the finest views in England.  And I didn’t come last.  Perfect. 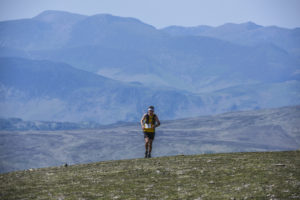