Highwood Hobble is a 5k trail race, described as “tough” by the only Strider who ran it this year. The race is a charity event, held this year in aid of Yorkshire Cancer Research.

116 runners and 10 dogs completed the course. The race was won by Gareth Cooke of Penistone Footpath Runners, in 18:31. First female was Laura Gill, also of Penistone, in 22:07. The sole Strider was Dawn Jackson. There were chip butties after. 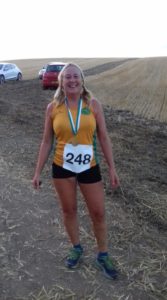