So – it was a bit of a spur of the moment New Year’s Day decision to sign up for a half-ironman distance triathlon. I had just turned 40 and it was the day you set personal goals – and most importantly my best friend from home had signed up and I am too competitive to let her do it alone.

Since then it has been 6 months of panic about whether I would be able to do it – and most importantly do it in a half decent way.

I took training quite seriously. To begin with the weekly Striders unofficial headtorch run was my lifeline – getting me out in all weathers every week on tough terrain through the tough winter. As time went on though I ended up missing too many headtorch runs in order to try and get more mileage in my legs both running and cycling.

I loved the training to start with – went to some swimming lessons and really enjoyed having a legitimate excuse to get out exercising rather than doing housework! But by June I was fed up. Fed up of having to get out on a big swim, cycle and run every weekend.

So – by the time this weekend came I was ready to do it. Or at least ready to get it out of the way, stop thinking about it all the time and stop training for it.

I started at 7.13 am in an all-women swim wave. The swim was great. A beautiful sunny morning on a lake in a country estate in Norfolk. Except for the terrible smell of goose poo, the weeds that wrapped themselves around your legs and the initial mass start panic it was actually lovely. It was my worst discipline – so leaving the water in 46 minutes feeling fresh was brilliant.

Then onto the bike – not my strongest segment either – and not helped by using a snack bag for the first time that was too big and got in the way of my legs. By the first feed station my hips were hurting and I couldn’t get comfortable. People were rushing past me at a disturbing rate and I was feeling worse and worse. I had hoped to see my husband spectating on the course at the second feed station and give him the snack box – but typically, not wanting to miss out on the action, he had actually gone out and joined the cycle and also did the full 90 km and missed me!

I came into transition 2 after a 3 hour 28 cycle feeling sorry for myself and worried that I wouldn’t be able to run. I started the run and couldn’t see how I would ever make it round the course in the 30-degree heat. But after the first feed station (there were 3 per lap with energy drink, coke, water, crisps, people sponging you down and sun tan lotion-ing you up!) I starting feeling better. I enjoyed the second part of the first lap and could see that if I could just nail the hill at the start of the lap each time the rest (2 more laps) was do-able. At the end of the first lap I overtook a friend who was also doing it and then on the second lap another. I felt stronger and stronger – especially as so many people were just walking or hobbling by this stage.

I managed to maintain a fairly good speed and even a sprint finish – and despite stopping at EVERY feed station ended the run in 1 h 57.

I loved the whole experience, the race was fantastically well organised and supported, and I was so pleased the run was the last discipline. I think it has totally clouded my judgement of the whole event as I loved it and may go back for more. In the meantime back to headtorching and having fun!

I don’t think any other striders took part.

Winning time was Sam Proctor in 4:13. First female was Rachel Hawker in 4:53.

Full results can be found at https://resultsbase.net/event/4468/results 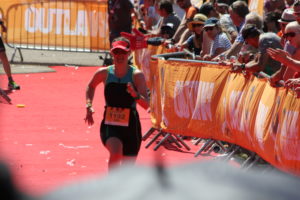