The Holymoorside 10k is organised by the 1st Holymoorside Scout Group and this year forms part of the Striders road race competition and what a great little event it is.

The forecast was for a cool morning with some rain so we were rather worried when we were directed into the car park, a large ‘well-manured’ and overgrown field which we were to park at the bottom of whilst being assured there would be enough scouts to push us out if needed. However we needn’t have worried since it actually turned out to be dry and rather warm!

A short walk to the village hall brought us to the race headquarters where the main event was preceded by a fun run which it seems a number of striders (myself included) chose to use as a warm up (with children in tow of course, this wasn’t some desperate attempt at victory).

The main event kicked off at 10.30am and the green and gold army were out in force.  Although I had read the route description which stated that the race “follows quiet country lanes along Loads Road uphill for 4km passing through scenic Derbyshire countryside to Longside Moor”, I wasn’t quite aware that the uphill meant covering almost 700ft in just 2 miles. I tried not to look ahead (or at my watch) too much, it was head down with the mantra “if you can get to the top you’ve pretty much done it” – this came back to haunt me in the last kilometre.

After the epic climb came the reward, virtually 6kms of continuous downhill to the finish, and it was great to see the average pace drop from in the region of 9 and a half minute miles to 6 and a half minute miles (I thought I was going some but Jeni Harvey flew past me at the 6k mark). The weather was glorious, the scenery was stunning and although the race was run on open roads there was little in the way of traffic.

Around the 9k mark though my effort on the uphill as well as my lack of training of late started to reveal itself as Letty (Hancock), Fran (Cummins) and Clive (Downing) left me trailing in their wake as we approached the village green – I had nothing left. But the end was in sight and it was one final dash around the ‘rec’ to the finish where we were rewarded with our mugs (complete with photo of ‘the climb’) and medals and were able to take advantage of the delicious home baked goods and bacon cobs. I would highly recommend this 10k, it has serious PB potential (5k not 10k!) and myself and a fair few other striders have already pencilled it in for next year. 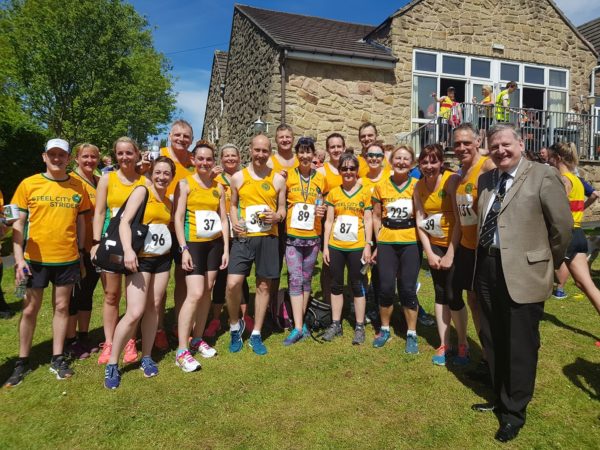