As days out go for running they don’t come better than this. Beautiful weather and steady saunter over to Hessle for my first Humber Bridge 10K – organised by City of Hull AC. It was going to another mid-twenties late spring day but wasn’t due to get too hot until after lunch. Though as soon as I stepped out of the car, the nice breeze coming off the River Humber was seriously welcome.

About a year ago my approach to running changed completely. I’ve never been fast and I’m probably never going to be (I’m perfectly happy with my 28-29 min Parkrun pace). I thought about what I got most out of running and taking part in races and I decided that I enjoyed it a thousand times more if I’m not stressing about a PB. So now I just enjoy myself and take in all the atmosphere and what will be, will be. Ironically all my races since that time have all been PBs.

Since Sheffield Half Marathon I’ve been struggling with my hips. Never had hip trouble before but it just won’t shake off. I’ve barely managed 10k a week since the HM so my expectations were pretty much non-existent. But I’d been looking forward to this for a few months and I’d rested up all week in preparation.

The race starts of Hessle Rugby Club on the banks of the Humber. Easy parking in the grounds and a nice little tidy rugby club ‘clubhouse’ for that all important pre-race tinkle. The smell of bacon butties almost got the better of my willpower. The race starts on the road near the “promenade” and follows the leafy Hessle suburbs to the Humber Bridge offices where it then accesses the bridge via the service road before going through the left hand side toll booths.

Up to this point it’s been a very gradual climb through mostly closed roads. A few local drivers were protesting at marshalls for holding up traffic on some of the stretches of open road. It was a bit of a squeeze in places as everyone had to take to the path. The actual crossing of the bridge is on the pedestrian walkways – East side out, West side back. The first 2.5km are pretty much a gradual incline from sea level to summit of the bridge. Nothing too strenuous but I found myself in a groove that was quite a lot slower than my usual 10k pace, but feeling good – and more importantly hip was fine.

That breeze had got quite up a lot as expected on top of the bridge. As the bridge levelled out and dropped back down to sea level I put in a faster km stretch aided by the back wind. The turnaround point at 5km is just outside Barton, going down the ramp, under the tunnel and back up the ramp on the other side. At the halfway stage I was quite surprised that I was on target for a 64 minute finish. Nowhere near PB pace but feeling good and still enjoying it.

Onto the west walkway, the climb back up (now into the wind that seemed to be a lot stronger than the tailwind on the way over) seemed to go on forever to the centre of the bridge. You could tell the Sun was having an impact and with no shade to be found, some of the middle to lower end runners were having a breather.

The last 3km are pretty much all gradual downhill from the centre of the bridge. I found myself overtaking quite a few before the trip back through the tree-lined streets of Hessle back to the Rugby club for a “sprint finish” on the pitch. The journey back over the bridge as expected felt a lot tougher than the outbound journey and I was clearly feeling the lack of quality training time. The hip started to hurt with around 3km to go, though not as bad as previous attempts of lower distances.  Despite that I finished strongly with my faster KM of the race on the final stretch. Over 4 mins slower than my best 10k time last year with 1.05.48. One of my slowest “road” 10ks but I wasn’t too disheartened and I know I’ll be faster again this year.

A good turnout of supporters with plenty of encouragement along the course. A strong local turn out from running clubs around Hull, North Lincolnshire and wider East Yorkshire area. 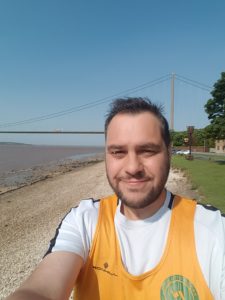