Now into its 5th year, the Isle of Axholme half marathon, run in support of the Team Verrico charity, offers a late year flat course for those in good form to chase a PB. Nick Burns and myself set off on Sunday to do just that, braving the wild flatlands of North Lincolnshire. The journey there was rapid, helped greatly by the amazingly good motorway network that Scunthorpe seems to have (in hindsight maybe it’s to help people make a fast escape).

Arriving into the picturesque town of Epworth, we soon proved the old axiom that no race is complete without running into a fellow Strider, spying the running and music legend that is our own Roger Watson.

The race starts off with a single loop around the market square before heading out towards the wonderfully named Owston Ferry. Fooled and feeling pressured by the “fast” description of the course, I went off far too fast over the first 5K, hoping that by some miracle that I would magically be able to maintain a pace I can just about scrape around a Parkrun in.

After some hurried revision of pacing strategy, general wheezing and a minor word with myself, I wound the pace back down a bit. It was with some relief almost to see Nick cruise past me before we hit the village and the turn for the long back straight next to the river.

Although not a warm day by any means, the course was exposed and with the sun high overhead there were more than a few runners pulling up. Matters probably weren’t helped with some interesting spacing between water stations with the 2nd being quite some way into the race after the 1st only being 3 miles in. Gritting my teeth, I tried to settle into a smooth pace and ignore the leaden sensation in my legs as we passed the half way mark of the race.

Finally, the long straight came to end and as the race hits 10 miles it turns back towards Epworth setting up for a nice 5K push for those who still have something in their legs. I sadly only had a rather unpleasant burning sensation in my legs so carried on the salvage operation. Having been forewarned there was a nasty sting in the tail with a “hill” in the last K I’d been trying to preserve something for the last effort. Indeed, it wasn’t much of a hill by Sheffield standards, and given the flat nature of everything else around you are gifted plenty of time to assess it…..

Too much time in fact, the mind can play tricks on you when you’re dog tired and it seemed to take forever to actually get to the climb. At this point, I’m embarrassed to say, I broke. The overly fast start finally caught up with me and I couldn’t keep the legs turning, regressing to a walk/jog over the last K to finish. Not the way you ever want to finish a race!

Certainly, a fast course, but with enough subtle undulation throughout that you will pay for not pacing yourself correctly. Although run on open roads the rural setting meant that there were few cars and combined with the small number of entrants there were points in the race you could fool yourself into thinking you were just out on the Sunday long run. The chip timing also deserves special mention for resembling a good old fashioned ASBO ankle tag.

One on my list to do again certainly, especially as they have pastries and flapjacks at the finish…

Our 3 Striders on the day: 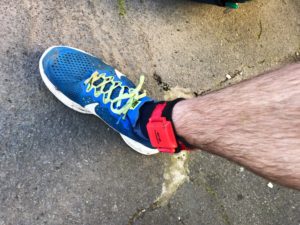