Well what can I say!

Firstly I opened the curtains and thought OH MY GOD!!!

I’d read Stuart Jones’ report for the spring Roche Abbey half marathon and thought it would be a good race to have a go at a trail ultra run (BIG MISTAKE).

We set off with plenty of time to spare (I mean who can get lost it was only in Maltby after all); well we just made it in time for the race brief. At this point I gave the husband permission to go home and await a phone call to pick me back up!!!

The first mile started off as well as I could have expected, a little bit off road running to a very narrow path which led out on to a farmer’s field. I ran across the top of the field then saw I had to run down to the bottom (I thought someone had swapped my trainers for concrete boots they were so heavy at this stage already). I then ran along the bottom of the field to a man-made rickety wooden path (let’s just say a good carpenter wouldn’t have gone amiss) under a fallen tree and along a forest path. I ran to the stepping stones (they were easy to cross at this stage due to the water level being quite low) then along the forest path again until I came out at the section on Gypsy Lane and back on some good old terra-firma. It was quite an incline and being as I was doing these laps 5 times I decided to walk briskly up the hill till it started to level out again, then once again I resumed running along the main road, turning at the sign for Roche Abbey and back along to a cobbled path that led back down to the forest path and to the feeding station, picking up some fruit pastilles as I passed through. Then along another path to a kissing gate, where it was an out and back turning at a miniature cone.

As I ran back in I noticed the Abbey at which point I thought it was a ruin of beauty but no self proclaimed brilliant architect could help it now!!!

Then it was back along the forest path to a small waterfall and the same stepping stones I’d crossed earlier (seeing them from another prospective). Along the path I ran to another incline, this time a slide/walk up which led out to another farmer’s field with lots of rotting corn on the cob and again more mud. As I ran along I came to my first bit of slippery descent before running along the edge of another field which brought me out to yet another field where we were warned it was very slippery so take care, but it was also very smelly as the cabbages in this field were well rotten. At the top of the field I climbed across a stile and on to a few more stiles and nettles (which were still bloody stinging).

Finally back into the road I headed down to another field, over a bridge and back through another field, climbing over a fence which led to the back of the pub and running across the timing mat to go and run the same lap another 4 times.

I had my first fall at mile 22, landing on a rock on my right side. My ribs the next 10 miles were agony and at mile 26 I fell on my backside right into the thickest muddiest puddle I’ve seen.

I finished the race in 6hrs and 45 mins. I was the only Strider competing

I was the second lady finisher but to be fair everyone else either pulled out or just didn’t turn up!!!!

Would I run this again? HELL NO WAY!!!! I’ll stick to road running. The ladybower50 was easy compared to this awful day out !!!!!

Full results can be found at: https://cdn.buildresources.co.uk/sites/1031/docs/race-results/Autumn_Roche_Results.pdf 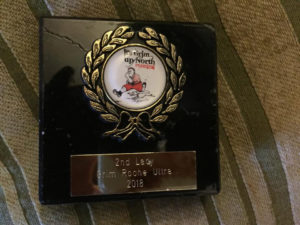