The 35th Kirkcudbright Half Marathon was held on Saturday 26th May.  For those of you who don’t know where Kirkcudbright is (pronounced kir-coo-bree) it’s just over the border in Scotland nestled in a bright sunlit bay between Carlisle and Stranraer.  The race started at 11 am, a little late but much better than previous years when it was at 1 pm and you were hungry before you’d even set off.

Striders represented over 2% of runners in the form of Kate Scott, Ben Heller and Steve Haake.  There was the usual comic confusion on the start line as people ducked from one line for the half and another for the 11 km Beeches run which was setting off at the same time.  The horn went and runners did a quick circuit of the local houses before heading back into town, past the tall Georgian stone houses, past the ruined castle and across the river Dee, with its small flotilla of fishing boats.  The race followed the contours of the bay and the stiff breeze suddenly dropped so that you could enjoy the hot, hot, burning, energy sapping sun.

Kate did her usual thing of racing off at 800 m pace before settling into a rhythm; Ben did his usual thing by ignoring all pre-race tactics and deciding that he’d attempt his fastest 5 km run of the year (achieved).  The route headed inland before doing an about-face at about thirteen miles in Twynholm (pronounced t-why-nam) with a cheeky Hallam-chase-type descent into the village, up the other side, back down again and up once again.  The locals were enthusiastic in their support – even surly looking teenagers broke into smiles of encouragement – and the race finished back at the Kirkcudbright Academy field, surrounded by cake stalls, burger bars and bouncy castles.

The men’s half marathon was won by Eliot Sedman of Grangemouth in a time of 1:17:39; the women’s race was won by Lisa Finlay of Dumfries RC in 1.26.46; Kenny Patterson got the biggest cheer of the day as he finished his 35th and last ever KCB half, hanging up his boots right afterwards.  Steve Haake was first Strider home seventeenth in a time of 1:36:50, just ahead of Ben Heller in twentieth at 1:38:15.  Kate Scott was just pipped to first FV50 on the home straight, with a fine time of 1:54:35 on what was a very enjoyable, if hot and windy, day. 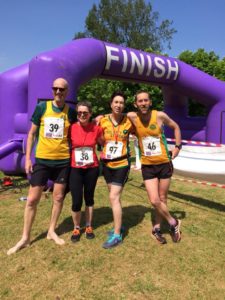