The 90 minutes before the start of the men’s Lad’s Leap fell race were ones of growing trepidation.  This was the Inter-Counties championship, and we were surrounded runners from as far afield as North Scotland, Northern Ireland and Kent. We had watched the70 strong women’s race, won in 53:58 by Emma Clayton of Yorkshire, who along with her team mates won the team event as well.  Chatting to a few of the women runners only added to the fear – the blistering heat on the second, long ascent being much mentioned.  To add to the nerves, our start was delayed to allow the women to finish.  Race organiser Des Gibbons had altered the course for this year’s race, to miss out a section across rough moorland, which was replaced with a long, fast descent – and hence a longer, much tougher second climb.  They were right – it was tough.  Those with GPS reckoned the distance to be about 6.5 miles, with 1500′ of ascent.  The men’s race was won by Nick Swinburn of the North East in 44:37, with the Yorkshire men’s team also prevailing.  The quality of the field is perhaps indicated by Simon Bailey’s 33rd place in 50:45 – he has been English champion eight times, most recently in 2016, and in 2015 was second V35 at the World Masters Mountain Running Championships.  Three Striders were among the 138 finishers in the men’s race – we are listed as “unattached” in the results as for some strange reason we had not been selected for the Yorkshire team.  Next year maybe … 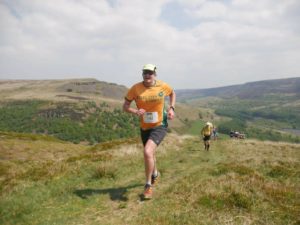