This annual set of races – Marathon, Half, 10k and others take place on a rather crowded Saturday – a great change from the usual Sunday.  Happily, Lanzarote boasts really quite nice weather as well, warm sun with a nice cooling breeze.  Just like blighty in December – or perhaps not.

Those who’ve been to Lanzarote may be wondering where there’s a flat (-ish) enough distance for road races on the island – the answer is along the coast between Costa Teguise and Peurto del Carmen. A certain Mr Brown went there last year but that wasn’t easy road racing.

Anyway, back to 2018…  I did the half, starting at Peurto del Carmen worryingly close to “The Guinness Tavern” from the vicinity of which a surprising number of runners emerged just prior to the 10:30am start.  The start itself was a jolly affair, much enhanced by the very enthusiastic and lively drum band.  They were so good that a number of runners sort of missed the start, only noticing when it suddenly seemed a lot less crowded…

So, we’re off!  Some 40 odd nationalities of runners pounded the pavement with the glorious blue sea on the immediate right along with the rather warm sun, clear blue skies… delightful.

In a few minutes we pass the first of thankfully many water stations and then the busy ACE runway.  It is a bit distracting to see enormous lumps of metal and plastic hurtling towards (and about 50m above) you whilst trying to run.  Amazing, vibrant (sorry) experience, though.

You then pass on the seaward side of Deiland with the beachfront cafes and whatnot where the more sensible were admiring the efforts of the possibly less sensible, accompanied by long cool drinks.  A bit further along from that distracting sight is the island capital of Arrecife with the El Reducto beach and the rather grandly obvious Arrecife Gran Hotel.   And lots of delightful watering holes of the ice cream kind.

The Marina Lanzarote is next on the agenda (about 10k in) and its rather industrial installations.  If you’re in luck, you might see very large cruise liners docked thereabouts – Lanzarote is a popular stopping place, I’m told.

There is a bit of a climb next and rather disconcertingly, you end up on a large, normally very busy, road traffic island before heading off along a mercifully closed slip road.

It’s at this point that despite all my earlier efforts, dehydration put in an appearance – it almost took my mind off the shipwreck (big holes through the hull), the power station and the funeral home.  Mercifully, relief came into sight eventually and much sipping of water later, partial recovery beckoned.  Ever so slowly, though.

The recovery turned out to be short lived as a hypo then developed (I’m Type 1 diabetic and hypoglycaemia (too low blood sugar) is hazardous).  The usual jelly baby fix sort of worked but combined with the dehydration my running slowed right down.  I wasn’t too concerned about that as (a) I was still thinking properly (at least by my standards) (b) more or less vertical (c) moving and (d) about 2 km from the finish.  Well, that’s the excuses out of the way!

The race finish is well worth crossing the line for; much nice food, fruit, people and very warm runners from all over the place.

On a serious note, preparation for this warm race is essential.  I thought I’d done enough but clearly hadn’t – start off very well hydrated and keep it that way no matter what.  Also, remember that the higher the temperature (usually) the more carbohydrate you need if exercising.  Tricky one, that.  And don’t forget the sun cream – I missed a few spots and they smarted a bit…

Don’t let any of this put you off; running can be quite tough in these sort of conditions; it requires training, planning and effort along with common sense, of course.

888 runners finished the half marathon (a fair number didn’t, mind you) with Severino FELIPE GOMEZ (unattached) being first to the food in 01:14:43.  Aroa MERINO was first woman home and an excellent 4th overall, in just 01:17:44.

Almost forgot – you get a most impressive, 140g,  11cm x 10cm, metal, medal for surviving the course – picture below.

The full results are here – as far as I can tell, I was the only Strider although I did get a fair few shout outs from other Sheffielders… 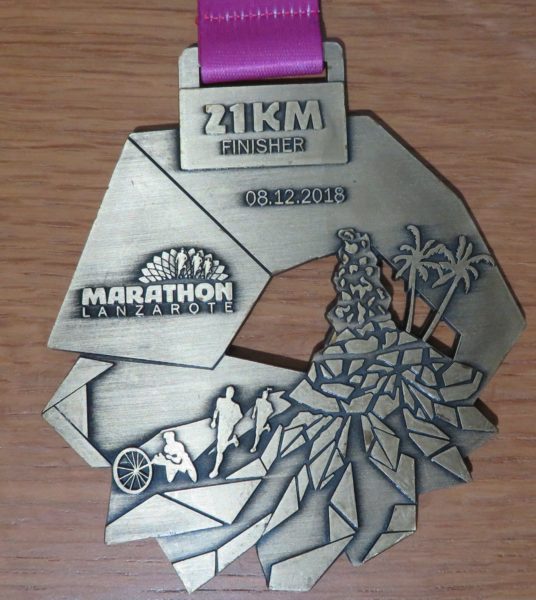 Don’t drop this on your foot…