In theory, the Leeds 10k is a lovely fast course…

The race is part of the Jane Tomlinson series, so it’s as large and well organised as you’d expect, with a race village, colour-coded start waves, pacers, plenty of water stations and so on.

There were a few Striders in attendance, and it was nice to pass the time before the start patting ourselves on the back for choosing such a marvellous running club.

The course starts at the top of the city centre near North Bar and the Belgrave Music Hall, though sadly neither of them are open for a pre-race pint. After a slightly bottlenecky loop down toward the railway station, the route opens out into a long, straight 4k up Kirkstall Road, which is fairly flat and wide. It then turns back on itself for 4k back, before jinking up to the LGI and finishing on Headrow in front of the art gallery.

So it ought to be good for a fast time. Except they put it in July and there’s almost no shade anywhere after the first mile. I should know this. I ran it last year. Never one for learning from my mistakes, this time I set off with the 45 min pacer, knowing my legs weren’t quite good for that after the previous week but thinking I’d stick it out till the turn and then see what happened. No chance. He was gone by 15 minutes in and I was slogging my way towards Kirkstall, sweating like cheap cheddar and searching the sky for clouds. About 4k in Arif Ali came bouncing past me with a cheery grin, on his way to yet another PB (that lad’s on fire) and then it was just me versus my DNF demons. Thankfully there were a couple of hosepipe stations in the back half, and plenty of bottled water, and my legs were gullible enough to believe me when I told them “we’ll just get to the next one…” each time.

After a last soaking from the West Yorkshire Fire Service, I found a burst of energy to get me up the hill and round the corner, and sneaked in under 49 mins.

I do like this course, but I think in future if I want to run up Kirkstall Road I’ll stick to the Abbey Dash, which has the sense to take place in winter.

Oh hang on though. They’ve just texted me a discount link to enter next year’s race. One more go won’t hurt I suppose… 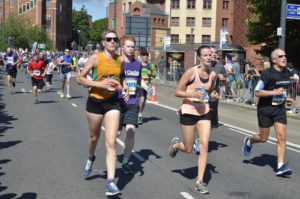