The Leeds to Liverpool Canal Marathon Course is a scenic, fast and flat, out and back route along a beautiful tow path. One of a number of races ranging from 5km, 10km, 20 mile, Marathon and Ultra, all setting off at differing times and in differing directions from Kirkstall Abbey along the Leeds to Liverpool canal path. This low key event was organised by ‘itsgrimupnorthrunning.co.uk’, I found it very easy to register and was kept updated with regular emails. Toilets and parking were at a local social club about 10 mins walk from race start and there was a small area for bag storage. Feed stations were every 3 miles or so with jelly babies and cupped water. Finishers all received a nice Halloween-themed medal, bottle of beer and a large bar of chocolate.

Having broken my 4 hour marathon target only three weeks ago at Chester I wasn’t confident that the decision to do another so soon would be a wise one. This was my first ‘its grim up north running’ event and having only done three larger scale marathons in the past I was a bit unsure what to expect.

I arrived in good time to complete a textbook ‘Thursday night Mick Wall’ warm up and made my way to the start line. With only 40 runners in the marathon field I decided to line up towards the front with the idea of not getting left behind on my own at the back. I was soon passed by a few runners but with the words of Ian Blackburn telling me not to set off too quickly, I settled in to a steady pace, enjoying the rural canal-side scenery as I headed off towards Saltaire. To paraphrase the words of George Ezra, ‘Time flies by in the Orange and Green’.

I reached the 10 mile turnaround point and counted only 10 marathon runners ahead of me, all waving as we passed each other. This was now unknown territory for me; had I recovered sufficiently from Chester and could I maintain my fastest ever marathon pace? The return leg followed the contours of the canal, gently downhill with a few ‘humps’ at the canal locks but I felt comfortable and was actually increasing my overall pace. I had managed to gradually catch a couple of runners that had previously passed me but I resisted the urge to increase my pace too much, too soon. I passed the start/ finish line after 20 miles to the encouragement of my family with only a 6 mile (out and back) loop in to Leeds city centre to go. At this point we met the ‘fancy dressed’ 10km and 5km runners in the opposite direction which added to the carnival atmosphere of the event but made some of the narrow passing points a little ‘unpredictable’ at best.

A final turnaround in Leeds gave me another opportunity to ‘size up’ the runners immediately ahead of me. Unfortunately, the turnaround also helped to confirm my fear that the course distance might be a little longer than the usual 26.2 miles (more on this later). I had felt tired from about mile 15 but due to the downhill second half of the route I managed to maintain a consistent pace. With only three miles (or so) to go I had a PB in sight and a sub 3:40 time that only a few months ago would have been unthinkable. In my head I knew that if I could just do a good park run time then I would achieve the revised goal I’d set myself about an hour earlier. I saved my fastest mile for last and managed to pass a couple more runners. The final stretch was a winding section of the canal but as my watch ticked passed 26 miles I still couldn’t see the finish line. Fortunately, my family had walked back up the course and were now shouting (very loud) encouragement to see me the extra 300m or so to the finish. A very sharp right turn off the towpath and I had achieved a new PB by over 3 minutes but due to the increased distance not the sub 3:40 I had targeted.

In summary, the increased distance was a little annoying but I guess that was partly down to utilising the same course and turnaround points for a range of distances and it certainly didn’t detract from my overall enjoyment of the event. The event didn’t have the razzmatazz of the higher profile marathons I have done in the past but what you do get is good value for money and a fun, friendly event. There was also a nice selection of cakes and buns for runners to enjoy and I will certainly be looking out for other ‘Grim up North’ events in the future.

Warren was the sole strider in a field of 40 marathon runners. First man was Colin Johnstone of UK RunChat in 3:05:52 and first woman was Ann Kisluk of Eccleshill Road Runners in 3:57:51. 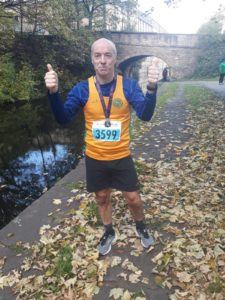 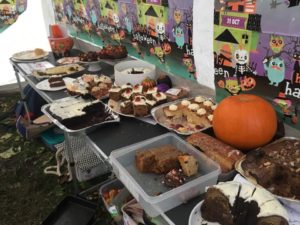