Leg it Round Lathkil was the final race in the Striders Fell Race Championship, and we had a good turnout for the ‘raceof the falling leaves’, after an exciting and closely fought year running up moors and down dales. Lathkildale is a deep valley in White Peak limestone near Bakewell, and the race starts with a plummet from the Lathkil Hotel. The 275 runners, after a minutes silence for the Armistice, stormed down into the deep like the Nordic hordes of the original Hlatha Ghyll. The race speeds along the dark valley bottom before a steep climb out and over fields. Then another wild descent before the final killer hill back up to the Hotel. Like a runners’ Valhalla, there was lots of finish-line cake.

Leg it Round Lathkil is beautiful, all the more so in autumn colours and avoiding the rain showers. It’s not got the heather moorland of the Dark Peak races, and is more footpath than fell, but the tough ascents and descents make it a real effort for the Championship.
First home were Alistair Thornton of Loughborough University Orienteeting Club in 45:23 and Mabel Backett of CUNAC in 52:15. Paul Middlemas in 50:27 and Fran Cummins in 57:27 brought Striders in. Names recorded on the official results are a good test of handwriting ability (Naomi Rahi anyone)?

Full results may be found here 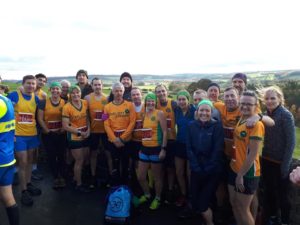