Race Date: 29 April 21018.  Report by Andy Norton.
Leicester Big 10K #olderandwiser
On Sunday I took the short trip to Leicester to take part in the Leicester Big 10K. The route was loops inside Abbey Park. It was a record field of 1,400 however you wouldn’t have known this with all the cones keeping runners on different laps away from lapped athletes.
I took part in this race on a whim when I asked my partner to find me a race this weekend to test out my Manchester Marathon legs. Since the marathon, I’d had really low heart rates on all my runs so I was looking forward to a good race, however in the week leading up to the race work had got very busy with lots of people wanting nice gardens for summer so I wasn’t sure what would happen.
We arrived slightly late, for several reasons A) due to missing a turning B) having to pull over as my son Oliver had lost his dummy in the back and was screaming to high heaven and C) we had left late as needed to pack everything but the kitchen sink into the car for said child.
We just about had enough time to run for my number and join the very long queue for the toilet. This meant no warm up apart from a few strides and so I huffed and puffed my way through the 1st mile in 5.44. I had noticed that there was a good top end looking around and also when they were counting down to race off I had in my haste forgotten to attach the timing chip to my shoe! Doh!
The race felt like a tortuous ordeal working at a very high intensity. At the 4k marker I even shouted to my partner “I am dropping out come 5k.. I’m too tired”. At 5k I didn’t know where the hell I was in the park so had to carry on. At 7k I started to catch a few people which helped me get my head back in the game and make my splits go faster again rather than slower. In the end I finished with a 37.43 – only 16 seconds faster than I went through the first 10k in Manchester Marathon in.
I wrote it off as a good tempo having averaged 6.08 pace. Two years ago, according to the Mrs I would have been like John McEnroe stomping around and sulking for the rest of the day!  Luckily I am older and wiser and I know that this was due to tiredness and not lack of fitness. I have been running for 11 years now and we all age. Life gets in the way of fast times and we are not what we used to be. If you don’t accept that slowly as it happens then one day you will get a rude awakening.
In summary, the Leicester 10k is a great little race, is great for spectators and I would definitely go back and do it next year.

1,251 people took part.  The race was won by Sylvain Lútendart in a time of 34.16.  First lady was Leila Armoush of Leeds City AC.  Andy was the only Strider in attendance. 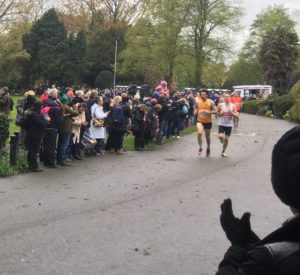