The rather prosaically named “Let’s Go Round Again Nottingham Marathon, Half, 5k and fun run” is described as a “disco themed lapped run…” and it took place in the rather stunning Holme Pierrepoint country park near Nottingham, which is home to the National Water Sports Centre.

If you think running is hard, take a look at rowing or perhaps rowers, all of whom seemed to be twice my height and distressingly fit.  Faster as well; the rowers on the lake during the race weren’t half moving and certainly a lot faster than their coaches, some of whom were trundling along the bank on the most decrepit bicycles I’ve seen.

The race itself involved 4 and a bit laps around the large lake which is populated by rowers, cormorants, seagulls, Canada geese, coots, swans, ducks, the occasional dog and other wildlife but mercifully not runners, who were advised against shortcuts.  With all this traffic, the management had thoughtfully marked lanes (with buoys) in the lake but the wildlife took no notice, preferring the age old squawking/flurry of feathers/(probably) avian swearing routine.

The running was very civilised with a fair number of folks turning up from all over.  There was much banter and no queueing at the start; for once, gun and chip times were almost the same, for me at least.

There were a couple of new experiences in store; I was overtaken by and overtook marathon runners – amazing, although I didn’t ask how many laps they were ahead of me, of course.  The second was seeing pretty much the whole route all the time.  On balance, that didn’t help – 21.1 kilometres is an awful long way when you can see it all!

I make no apologies for the picture – this young lady and I had been exchanging places for most of the race and she challenged me to a “sprint for the line” at the end which worked equitably as we crossed that line at exactly the same time.  Her expression says it all really.  You’d never guess she’d legged it for 13 miles…

119 runners completed the half marathon which was won by Gary Gregory (a nice chap who smiled a lot and said encouraging words) of Hallamshire Harriers in 01:15:10 some 5 minutes ahead of the second home.  The first lady was Jenny Knass of Stockport Harriers (7th overall) in 01:28:36.

The results are here and I think there was only one Strider but if you were there, please say so and you’ll be added. 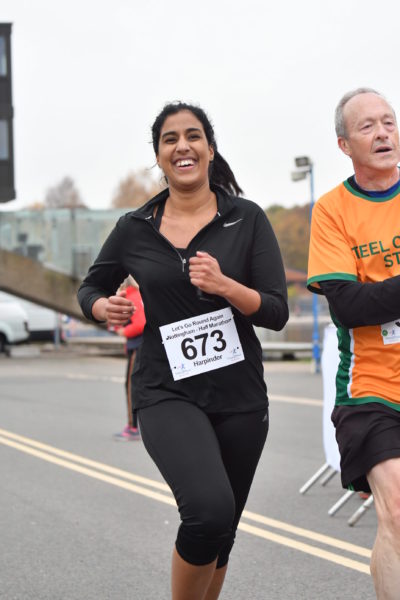