After he had started to run more this year, I jokingly told my boyfriend that we should run a 10k together. I perhaps, therefore, should not have been so surprised when he sent me a screenshot of the entry confirmation, while I was in Germany. It looked like I needed to train for a 10k whilst not in England.

I’d been back at work for a week after the school holidays so thought it was about time to leave Sheffield again. I made the treacherous journey along the M1 (getting stuck in roadworks) to Lichfield – to see my parents for the weekend.

It was nice to be back in Lichfield, to do a race which I had first completed at the age of 16 and done three more times since then.

I set off with an old school friend for the first kilometre and had a lot of fun reminiscing. We decided that perhaps we should focus on the race so she ran off in front of me.

The route is quite pleasant, going to a village called Whittington and back, along country roads. There are a couple of hills in the middle which were less pleasant but since living in Sheffield, they don’t seem as troublesome as they used to.

The day heated up later on but we managed to avoid the worst of it during the race. However the water station was gratefully received and after 8k, some support from my parents too.

I finished the race in 55.21 which I was fairly pleased with given the lack of training. I managed to make it back to the sidelines to see my boyfriend coming in after the 60 minute pacer – he’d hoped for under an hour so was slightly deflated. You can imagine the excitement on his face when he found out the chip time was 59.59!!

We enjoyed the free massages after the race very much and the atmosphere on the field by the finish was fantastic – another great run!

990 participants completed the 10k. The race was won by Kadar Abdullahi from Birchfield Harries in a time of 33:07. First lady was Liv Harris (unattached) in a time of 41:41. I was the sole Striders’ representative, scooping 392nd place in a time of 55:21. 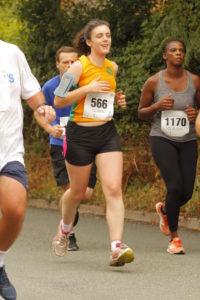