5 weeks ago, I decided it would be a great idea to visit my parents for the bank holiday and do a half marathon in my home town. It would be a great way to work back towards to a fitness that I’d completely lost in 2017 and a way to try out my new Striders vest. Indeed, a week before I was confident that a sub-2 hour time was on the cards.

But then suddenly 24 hours before the race, after throwing up and in full knowledge of the weather forecast, I was starting to question if this was the great idea I had imagined it would be.

I turned up to the race at my old school and did a warm up with everyone else on the school field before heading en masse to the start line. The first couple of miles I enjoyed – they were along roads I had run a lot as a teenager so I was on familiar territory and not struggling at all with the ‘hill’ after living in Sheffield.

And then my memory starts to become a little hazy. Most of my memories of the rest of the race were of waiting for the next water station and wondering how it was possible for the sun to be so relentless, and for the wind and shade to be so non-existent.

It was a lovely route through country lanes and along streams. We also passed through a couple of villages which had clumps of people to cheer us on. I will definitely be back to try out the route again.

There was also a great camaraderie despite (or perhaps because of) the weather. Everyone was supporting each other. One man passed me and asked about the Steel City Striders and then waited for me at the end to shake my hand.

The last few miles became a case of just trying to make it through the race – which involved having to walk parts – which I never thought I’d do. This wasn’t made any easier by the fact that there was no water left at the last water station.

Seeing my parents again half a mile before the end gave me a boost on the last stretch (downhill) towards the end.

After all the struggle I was genuinely shocked to have made it in 2.09.51 and even more so that my first 10k had been under 55 minutes! Congrats to all the Striders who battled the weather this weekend!

595 runners finished the course. The first male was Oliver Harradence of Royal Sutton Coldfield AC in a time of 1:13:15 and the first female was Kate Stubbs with a time of 1:37:17. 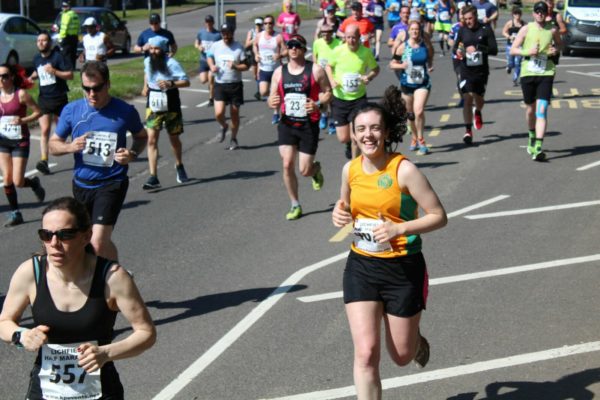