There once was a young man called Pete

Who thought he had wings on his feet

He went out in the sun

And got burnt on the bum

Which gave all the girls quite a treat

The Bon Secours Hospital Great Limerick Run incorporates a marathon, half marathon and corporate relay. There is also a separate six mile race together with a kids fun run the previous day with a reported 12,000 people competing over the course of the weekend.

At Limerick, the marathon starts at 09:00 with the half marathon starting at 10:30, joining in with the marathon competitors just after their half way mark. I didn’t understand how this was going to work and although the chap on the microphone was wittering on inaudibly about waves it didn’t make sense as there were no starting pens or other segregation  as the t-shirts forced their way to the front as usual.

As it was the sun came out at 10:30 (the marathoners had blessfully been encased in mist until then) we were blessed by the Bishop of Limerick followed by a further blessing from none other than Sir Bob Geldorf who counted us down. As I approached the line I was conscious of the 90 minute pacer alongside. Not that I wanted to follow him, there are mile markers and I have a watch, but they are an unnecessary nuisance with the congestion that they cause. Anyway, if you can run sub 90, you shouldn’t need a pacemaker. As we approached the line, finger on the start button of the watch, we were brought to a sudden halt as two marshals pulled a tape in front of us. So this is what they meant by waves; the half marathoner competitors were to be drip fed into the race so as not to swamp the marathon runners.

But then “The pacer has gone!” came the cry. The pacer had been one of the last to get through the tape as we stood and watched him disappear with no-one actually following him. Once we were released, there was a sprint as the lemmings tried to catch him up thus ruining their race in the first kilometre.

As for the race itself, Limerick isn’t a hilly place although the 2x1200m out and back at the Gaelic Grounds at 10/23 miles came at a tough stage in the race and was mentally challenging. The course is largely suburban and although the crowds in the city were large and vociferous, elsewhere it was intermittent and no-where near as large as Belfast where I raced last year and it seemed that everyone was by their front garden to cheer on their visitors. 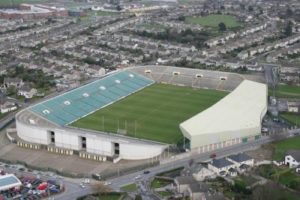 The Gaelic Grounds, Limerick. Gaelic football and Hurling are massive in this part of the world with even the tiniest village seeming to have a signpost to is own GAA pitch.The route comes down the main road from right to left then turns to do a lap of the housing estate before returning from whence it came.

Race day organisation, apart from the bizarre start arrangements, was excellent. Full road closures, hoardes of marshals and portaloos aplenty if you timed it right. With race packs only to be collected at the expo on Saturday, I had paid a premium to have my race pack sent by post. On the Wednesday received an email from the organisers advising to collect my pack on race day as there had been problems with production.

Personally, this was another personal worst as the heat (21c) and too much sightseeing and Irish hospitality the day before took their toll. For the record, the race was won by Peter Somba (Dunboyne/Kenya) in 1:08:59 whilst first woman home was Claire McCarthy (Leevale) in 1:17:22. A link to the full results is here Limerick Half Marathon if you want to pick over the bones. I was 5th M55 showing that the standard wasn’t that great despite being the Munster Championships. 4163 finishers in the half (693 marathon) although it’s clear that some didn’t seem to have run a step of the route. 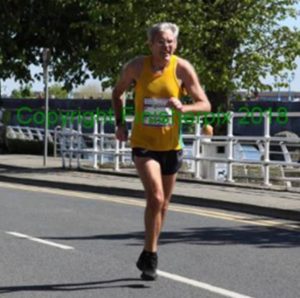 A vague attempt at using the arms to generate some knee lift near the end of the race.

T-shirt, medal and goody bag for your 59 Euros but all this seemed irrelevant when you have come all this way just to mess up again.

After the race I was talking to an athlete from Ennis Track AC, near to where we were staying, and got an invite to training on the following Thursday. Unfortunately we missed the ferry over the Shannon at Tarbert coming back from Kerry that evening so were too late to get there. I had looked up the track beforehand to find out how to get there. Alongside the floodlit tartan track, there are sportspitches including astroturf, marked walking trails and a fixed cross country course.Use of the track was three Euros.

Postscript. When I got home, I got my t-shirt out of it’s bag only to discover that it was a child’s medium from the fun run the previous day. An e-mail  brought a response first thing Monday morning promising to send me my shirt. A month later, it doesn’t seem like said shirt will arrive..

Position and times are chip as gun position times don’t work unless you got through the tape.