Owing to my poor diary skills, I couldn’t stick around after this race for the barbecue and prize giving, which is a real pity because it was a lovely friendly event. Back next year then!

Litton Christmas Cracker starts and ends in the small and picturesque village of Litton, North-west of Buxton. It’s just over 7 miles, in an anticlockwise loop with a little sticky out bit on the Eastern side. The weather was cold (about 6C when I parked) but dry and bright. It had rained a lot during the week though.

After registering in the village hall and weeing in the village pub, we did a quick team photo and then were herded into the start pen to be given a detailed pre-race briefing: “River’s flooded. Three, two, one, go!”

The Christmas Cracker starts off innocuous and descends a fair bit early on. There’s a short starting climb up a road, followed by a fast descent across a field to wake your knees up. There’s a real bottleneck at the bottom, so it’s worth starting near the front. Next it’s on to a roadside path, where we got our first inkling that they weren’t kidding about the river. The far side of the road was probably a couple of inches deep and flowing fast. Not to worry though, as we soon got away from the road and into some fields that were muddy but just about grippable (I was glad I’d gone for fell shoes rather than trail). There was a bit of a climb, but nothing out of the ordinary. And then 2 miles in we had to descend to Litton Mill. I’m not a good descender at the best of times, and the banking to get down to the mill was completely out of my comfort zone. I only fell on my backside once, but most of the people who weren’t already ahead of me seemed to go leaping merrily past as I picked my way down.

We were soon on a lovely well-maintained flat trail, galloping along next to the river. “I don’t know what he was talking about,” said inner voice. “I mean there’s a decent amount of water in it but it’s nowhere near floode… oh.” The path was only under water for a few hundred yards really, but it was calf deep and pretty hard work, not to mention cold. Once out of the water there was a short slog up a road and a nice fast descent of someone’s drive to the bottom of Bloody Big Hill (which I think is what Wardlow Hay Cop means, translated from the Saxon). By this point the sound of all that running water had had an effect on my bladder, but not wanting to sully the good name of the Striders I crossed my legs and ran awkwardly on.

Somewhere part way up the hill was a sign that says something like “You can take any route you like up to the trig point”. There was no way I was digging in my bag for a map so when a confident-looking bloke turned sharply off the path I decided to follow him. After leading me across a a trackless dungfield, he got us back on the path having cut out a decent-sized corner. We continued up a steep climb until we reached the trig point, which is apparently a bronze age burial mound (https://historicengland.org.uk/listing/the-list/list-entry/1008735) but today had a Christmas tree on it. The view from the top is immense, and I should have stopped to take pictures. But I was 5 miles into a fell race so instead with single-minded determination/punch-drunk delirium I faced into the wind and chased Bob Grocutt down the hill. This is how I learned that Bob Grocutt is much more nimble than I will ever be. By the time I got to the bottom I was clapped out, and the discovery of another climb was not welcome. It was only half a mile or so though, and once over the top I barely had time to get overtaken by a man with a dog before dropping back to the village and a very welcome finish line.

Prior to 2018 I’d only done a couple of fell races. This year I’ve done half a dozen, and it’s been absolutely ace. For someone like me who’s never going to win prizes, it’s a very different feel to road racing. Each race is different, so there’s no pushing to chase a PB, or looking at split times. It’s just the joy of seeing whether you can get yourself round and overtake a few people, discovering some beautiful scenery and meeting the friendliest bunch of people you could hope for. If you’ve not tried it, I heartily recommend giving it a go!

214 runners  finished, first among whom was Max Wainwright of Dark Peak Fell Runners, in 49:27. First female was Sally Fawcett, also of Dark Peak.

Full results can be found at: http://buxtonac.org.uk/wp-content/uploads/2018/12/Litton-Xmas-Cracker-Dec2018.pdf 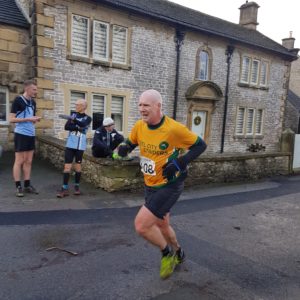