Liverpool. Home to The Beatles, Superlambananas (no, I’m not talking about Andrew Woffindin), Margi Clarke, Red Rum and, for one weekend only, more than 40 Striders who took part in various 5Ks, half marathons and a full-blown 26-mile bad boy set to test your resolve more than listening to the Beatles Revolution Number Nine on repeat. (Yes, this report will attempt to crowbar as many Beatles references as possible into it. I’m A Loser, I know.)

Something that really struck me this weekend was just how brilliant it was to see so many Striders young and old come together to celebrate, drink (in the Peaky Blinders bar of course) and help take part in the fifth edition of the Rock ‘n’ Roll Marathon series. It certainly didn’t Rain, and it was more a case of Here Comes The Sun as temperatures topped the 24 degree mark as Striders set off on a 26-mile long and winding road that took in an extended loop around Anfield and Goodison, or an abridged 13.1mile version that snaked around leafy Sefton Park.

Both versions featured Penny Lane, Princes Park and a long, long, long and terrible three-mile section along Liverpool’s famous river which had everyone begging for Mersey [that’s by Duffy – Accuracy Ed.] All along the route were bands playing rock n’ roll music of various descriptions (was that a death metal band at mile 11 or did I just feel like death?) and an amazing Samba band just past the halfway point. At one point I heckled a band that were playing famous Liverpool anthem Never Gonna Give You Up but I got No Reply. On a day where it was more a case of Here Comes The Sun Cream than Get Mac, getting an amazing time was always going to be an uphill struggle (although I was one of the lucky ones who did). However, it was an amazing time – a great turn-out of Striders who all had memorable races (for a whole host of reasons) in one of our best and most historic cities.

Please please me and organise another one.

3,234 runners completed the marathon, including 15 Striders.  Race winners were Terence Forrest in 2:35:55, and Hilary Honeyball in 3:13:48. First Strider was Ben Jones in 3:04:18, but 2nd Strider and 2nd place in the ladies’ race was Ashleigh Barron in an incredible 3:17:22 – a pair of phenomenal performances, all the more impressive given the punishing conditions on race day.

[Editor’s note: the published results from the Liverpool weekend are incomplete (marked with *, above) and do not include club affiliations. It’s possible that some Steel City Striders runners have been missed from this report. If you know of any omissions please let us know on our Facebook group.] 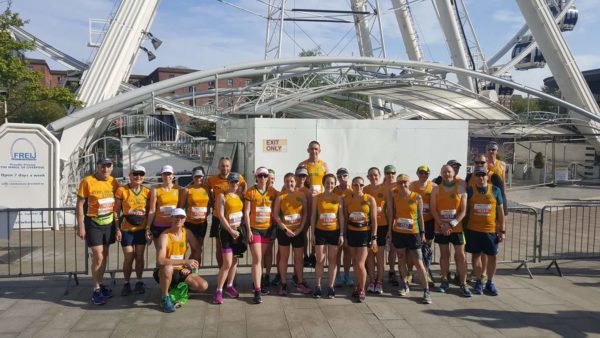