Clive Downing has studied the form of Eilish McColgan to improve both his posture and ’float’ over the road surface.

Also in shot, polite signs asking us all not to use the bushes as toilets. Seemed fair. 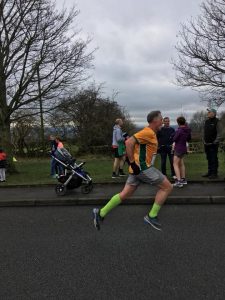 There’s a whole lot of spring half and full marathon training going on at the moment. There are groups out at ‘Daft O’Clock’, groups doing the Ringinglow loop, groups off along the TPT, but a small band started the new year’s Road Race Championship at Liversedge. Thirty two Striders have put points on the board, and can already count how far behind Phil Skelton they are going to finish in 2018. (He finished fourth overall in 1.17.38 and scores 95.79 points, I think.) Lucy Broom heads the women’s Championship, having posted 1:34:44 (and earning 96.87 points by my calculation).

Commonly-held belief is that this race route is a proper challenge, a bit if a brute, with a difficult amount of ascent en-route. That reputation was probably enough to have put off some Striders, but a quick bit of data analysis throws up a set of contradictions.

The numbers suggest that Sheffield, though including more climb and descent, is shallower and faster. And yet…

Seventeen Striders ran both. Of these, twelve ran faster at Liversedge than the April previously at Sheffield. One of these (Phil Dooley) posted an incredible 33 minute improvement, with the average improvement being 5 minutes 37 seconds!

The five Striders who ran Liversedge slower than Sheffield were only between 1 and 3 minutes slower.

And therefore, forsake your ‘flat and fast’ routes, give up your plans for posting a PB by the seaside, and take to the hills!

Yes, the traffic was a risk, the steep descent was beyond 1:7 and too steep to run down for me, and the complete absence of portaloos was interesting (see Facebook).