The look on his face was one of confusion, mixed with mild concern.

“But there’s nowhere nice to run in Liversedge”, he said. “It’s not even really a place at all – just a collection of houses.”

Thus went the conversation when I told an old friend from Liversedge that I’d signed up for a half marathon in his hometown. Well, home village. He politely refused my suggestion that he come along to watch.

But despite his trepidation, as it was the first race in this year’s Striders Road Race Championships – which I’d decided to have a bash at for the first time – I found myself part of a large group of Striders exploring 13.1 miles of undulating roads in this not-especially-scenic part of West Yorkshire.

As well as wanting to get the road race champs off to a not-too-embarrassing start, I had two aims for the race. One was to PB, which involved beating the 1:40:35 I ran at the Sheffield half last April. And the other was to go sub-1:40. More on that later.

Helping me on my quest was my husband Alasdair, who said he was prepared to abandon his “I-only-race-on-the-fells” rule to pace me round. But I hadn’t anticipated being forced to hand over my Garmin to him on the start line, in what he said was essential critera for my trusting him as a pacer. My race was in his hands. Well, on his wrist.

After some friendly chats with very lovely Strider companions in the race field, and feeling somewhat naked without the purple lump of time-telling plastic, we were off.

I watched the likes of Phil Skelton, Tom Bassindale, Tim Holt and Lucy Broom sprint off into the distance as the race made its way down a fairly steep hill, before we started climbing up again, running on busy pavements, around dog walkers and through queues of harassed-looking people waiting for the bus.

“STAY WITH ME!” Alasdair shouted, as he pulled me up the hills, proffered gels in my direction, and tried to stop me getting hit by fast-moving oncoming traffic. Each mile he’d shout out what time we’d hit, and it became increasingly clear that the 1:40 was going to be a tough ask.

I’d thought the Sheffield half was a tough course but, essentially, at Sheffield, once you’ve got to the Norfolk Arms you’re home and dry (aside from that push up out of Dore, but that’s pretty much over before it starts). Liversedge, though, was a different matter. Hurtling down a hill at mile six or so, and then dodging pedestrians through Brighouse, I knew that what goes down has to come up.

And that was when a resigned-looking bloke in a Todmorden vest said “Ugh. Up now.” He knew what was coming.

The climb out of Brighouse was hideous. Trying to maintain 7:30 pace was impossible and I slowed almost to a walk as I desperately tried to hang onto Alasdair The Pacer. Al, incidentally, was jogging back and forth, chatting away, and claiming they weren’t really steep hills at all. Sadly, I didn’t have the energy to argue.

Mile 10 was particularly grim as we slogged up a busy A-road, traffic hurtling at 50mph towards us, with scenery including an M62 crossing and industrial estates. Then there were some housing estates, and more hills. Everything was hurting by this stage, and Al’s watch-watching had gone from confident to slightly worried. His words were encouraging, but the tone of his voice when he shouted “you HAVE to hurry up NOW” made me realise this 1:40 wasn’t the certainty I’d hoped it should be.

Coming up to the home straight – which of course wasn’t straight – I heard someone shouting “GO ON JENI!” from their car window. I have no idea who it was but by powers of deduction (ie figuring out who might have finished, and be driving home already) I think it might have been Phil Skelton. Thanks Phil!

Between Phil’s shout of encouragement, and Al shouting at me with the intensity of a jockey flogging a horse at the Grand National, I managed to find an extra burst of energy to sprint the last 0.1 miles – but it wasn’t enough. As I crossed the line, the official clock had already ticked over the 1:40.

It was a PB – just – but it wasn’t enough. Pathetically, I sunk to the ground, sat on the pavement, and cried. A lot. Alasdair threw Haribo at me but I carried on crying. A very friendly Strider then joined us and offered some words of encouragement (99% sure it was Tim Holt?) at which point I realised it was time to get over myself. 1:40:15 on a tough course was still a PB. And I had a fine official Liversedge Half boot bag to enjoy.

So I sloped off, feeling somewhat embarrassed, and drove home. Whereupon it shortly started becoming apparent that, in fact, my run had not been in vain at all. The Striders women won the ladies’ team prize, thanks to an absolutely belting performance from Lucy Broom (4th woman), backed up by me and Letty Hancock. And somehow, I’d also apparently won a v35 prize. I found this astonishing.

But it taught me some important lessons, mainly that it’s not all about the clock. It’s about the course, and the field, and doing the best you can do on the day.

Talking of the best we could do on the day, the Striders put in some incredible performances. There’s too many to list, but top mentions go to Phil Skelton (fourth overall) and Lucy Broom (aforementioned fourth lady). I’m also proud to be part of the winning ladies’ team, as team prizes are really rather special indeed. 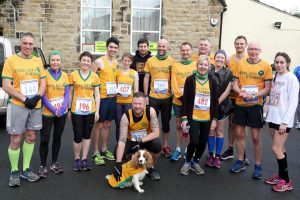