On Wednesday 9th May, Tom Halloway and I ventured down to Loughborough for the University’s Open Track meeting. Both of us are focused on improving our times in the 3k to 10k distances this summer (although Tom’s times are significantly faster than mine!), and so track meets like this are a great opportunity to focus on some speed.

Tom had made a great start to his track season, running for Barnsley AC in the Northern track league on the previous Saturday, with a win in the 800m and second in the 1500m. He was now focusing on the longer distance where his PB is 9.16. Ultimately, he’s after a sub 9 minute time and I’m certain he’ll achieve that. In contrast, while I may be a veteran in terms of age and my experience in longer road races, I am very much the novice when it comes to track racing. After Manchester marathon, I am focused on trying to get a lot faster at shorter distances from 3k to 10k in the remainder of this year, which I think is the key to me running a faster marathon next year. My only previous track races were the Steel City Mile in 2015, and then last year I did my first track 3k race at Woodbourne Rd – I had been quite pleased with my 10.06 time in my first race, giving me confidence in targeting a sub-10 minute time this year.

We both hoped we might achieve our goals at this meeting, but realistically it was a season opener for us both, to help the transition from Road to Track and to give us a base to build from in future track meetings this season.

The meeting was held at the Paula Radcliffe Stadium – the name is enough inspiration in itself. We got there nice and early and so had time to chill out and watch some of the earlier races. Our race was at 7.15pm, and so we started warming up about 6.30pm. The time seemed to pass quickly and in no time I was completing my strides and we were lining up on the start line. I actually felt a little rushed in the end and didn’t allow myself the time to have a few minutes of calm in the start area, to get me focused and ready before the race started – a good learning point and I will start my final warm-up earlier next time.

There were 10 of us on the start line plus a pacemaker. I was struck by how young everyone was. 7 of the 10 racers were U23 or U20, mainly from Loughborough and Nottingham Universities. There were 2 seniors (one of which was Tom) and then the old codger, me, who was the only runner in the Masters’ category. I suspected this would be a fast one!!

We set off, and almost immediately I was running alone. There were 3 runners behind me so I wasn’t last. The temptation was to go with some of the runners ahead, as the pace felt OK, but a quick check of my watch told me that this would be way too fast and I needed to stick to my plan of 80 seconds per lap (5.20 min/mile pace). In my previous track race, I had run 73 seconds for the first lap, and the rest of the race had been a very painful, slow decline. I wanted to avoid this, so I let the others go ahead and hoped they may come back to me later in the race……they didn’t!!

I was quite pleased going through lap 1 in 79 seconds and 800m in 2 mins 37 seconds – slightly too fast but not too bad. I went through the first 1k in 3 mins 19 seconds, which was perfect. Meanwhile, Tom had disappeared off into the distance from the start. He was up there racing with the front pack, and knocked out an amazing 2.23 mins for 800m and 2.56 mins for the first km – impressive stuff!

As I continued around my third lap, I was conscious that, although my pace was on track, it was feeling quite hard. I wasn’t sure if I could sustain this. The difficulty with these shorter track races is that the margins are very thin. You don’t want to fall behind the pace at any stage, but sticking with the required pace can be very painful as the race develops and you have to dig very deep. I came through the first mile in 5.19 and then 2k bang on target in 6 minutes 40 seconds. But by then I knew I probably couldn’t sustain 3.20 min/km pace for the final 2 ½ laps.

Sure enough, my pace dropped off, just by 1-2 seconds per lap. The final lap was very painful but I was pleased not to totally collapse and to maintain a reasonable speed. I crossed the line in 8th place in 10 minutes and 7 seconds – just 1 second outside my previous 3k time.

Meanwhile, Tom had a fairly similar experience – albeit at a much faster pace. His pace dropped off a little in the second half of the race, and he crossed the line in 5th place in 9 minutes and 29 seconds. That’s still a great performance.

I then went for a gentle warm down jog around the track, whilst watching nutcase Tom proceed to do a speed session of 2 x 4 x 400m!! Crazy!!

I think it’s fair to say that we were both a little bit disappointed with our times. But on reflection, we will both take this as a decent season opener at this distance and have got that first race under our belts we both expect to make some good progress in the coming months.

Next stop is the Run, Jump, Throw event at Woodbourne Rd on May 23rd, where Tom and I will both be racing the 3k and maybe the 800m. I have to say that I love these track meetings. It’s great to hang out at the track, watch the other races, and enjoy the very different (and exciting) experience of track racing. It would be great to see a load of Striders there – I can highly recommend this as a great way to spend a summer’s evening.

On to the next one…… 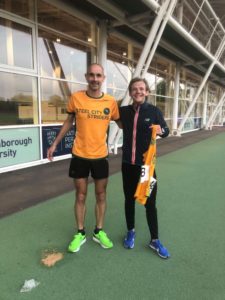