The Lyke Wake Walk is a 40 mile crossing of the North York Moors from Osmotherley to Ravenscar.  An ancient route for funeral processions, the word ‘lyke’ meaning corpse and ‘wake’ the watching over of it whilst singing a ‘dirge’.

Much of the route is shared with The Cleveland Way.  This is scenic, undulating and provides spectacular views from the high ground on a clear day.  Steep climbs up to Botton Head lead on to sweeping cinder track along a disused railway.  The bog section did not offer much challenge in the extremely dry conditions, being more like a spongy carpet than the usual man-eating tendency.  A pretty descent into Ellerbeck, followed by slog up to Lilla Howe and the ravine at Jugger Howes to negotiate before the phone mast that has been visible for 5 miles, getting slowly larger, is eventually reached.

The annual run on the route is now hosted by Quakers running club, who put on fantastic organisation, looking after all of the runners with plenty of fluids in the 26+ degrees heat and treating them to rice pudding and tinned fruit at checkpoints.

The event is run under a handicap system with starting times prescribed based on previous or predicted time.  First finisher at 2:40 pm was Nikola Carr, who in a time of 7 hours 40 was also fastest female.  Fastest male was Jayson Cayvill in a speedy time of 5 hours 54.  96 finishers, 7 dnfs.

Only one Strider in attendance: 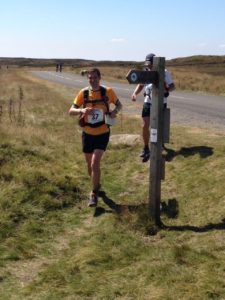