It was strange to not see any other Striders at this event, also nice knowing I would be first Strider over the line regardless.

The 4th edition of the Mansfield 10k drew some serious looking athletes. Before the start in the market square there was a mix of some quite (incredibly) bendy people with very short shorts, mixed with some competitive stares aimed at other runners who dared to stretch a little more than them.

The course is a 5k loop, done erm… twice! With 600ft of climbing it was not what you would call a super flat course. The first hill out of the start may only have been a tenth of a mile long but at 15% is was hard work, especially as you had to do it 3 times.

Lining up with the other 606 runners in the start area it became obvious that the warm up was going to be fun. The jogging on the spot started with a whole host of ‘sorry’, ‘oops sorry about that’ and ‘this is too tight to move’.

Hi knees resulted in my promptly kneeing the guy in front of me up the bum and subsequently kicking the woman behind me in the knee. There was no way I was trying the star jumps or twists, jogging on the spot was fine.

I told myself that I needed to run my own race and starting near the middle or back of the field didn’t matter as we had chip times.  Well it only took me a few hundred metres and I was sprinting past people. A quick look at my watch said I was really going too fast. However, my legs decided it didn’t hurt enough so I carried on for a while at that pace.  Things settled down on the 2nd lap and I got into my groove, the sprinting had taken its toll on me and I ended up walking for 20 feet to get my breath before one of the last downhills. I could see a runner disappearing in front of me. The only way I could catch him was to sprint. It is amazing how fast you can go when the finish line is fast approaching and people are cheering for the guy behind. I managed to pass him with a couple of metres to go which also secured me a top 50 place.  Another runner slowed and I rose another place. Finally finishing in 49th of 607 runners.

*We have to go with the official time Simon!

I got my medal from the scouts, who did a great job. I also witnessed the carnage as the race village was flooded because the council forgot to turn the fountains off!

A great race and well worth a trip. 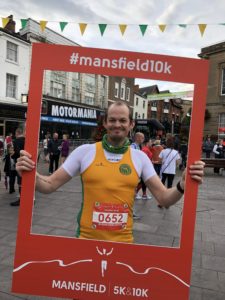