I’d had this event in my diary for months.  A genuine top drawer masters event created by athletes for athletes.  It’s the brainchild of successful masters athlete Darren Scott with help from local runner Tom Grantham.  Being on our doorstep it was a no brainer i’d be there.  A no brainer until I pulled my hamstring 8 weeks ago in training which threatened to derail my summer for good.  Thankfully, physio intervention and a strict strengthening program got me to the start line.

The day had the usual comprehensive list of events: 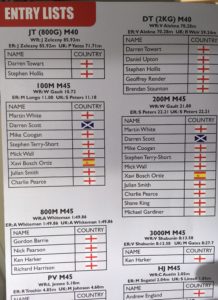 Upon arrival I registered my attendance and picked up a souvenir programme.  This was novel, we don’t usually have things like this at masters event.  They were really pushing the boat out.  I was grinned like a Cheshire cat when I opened the programme to see my name along with an England flag next to it.  Maybe i’m easily impressed?

Despite my best efforts on social media in trying to push this event, only one fellow Strider joined me in racing on the track.  I’m still completely baffled by lack of interest in this sort of event within the club.  Answers on a postcard please.

Thankfully Clive Downing was there and his family came down to support him which was brilliant.  Big shout out too to Tom Halloway who also came down, albeit just as a fan.  But we were chuffed to see him.

First up, the 100m.  As Clive had never ran before he’d not put a previous time down which meant he was in the first race.  The races were all seeded by previous time, regardless of age or sex.  This lead to some very competitive races throughout the day.  It also meant that newcomers were not dropped in at the deep end with runners out of their league.

I was nervous as hell for Clive.  He looked nervous too.  He kept asking me about how to do this and that.  I told him to stop worrying about the intricacies and just go for it.  And boy did he go for it.  I don’t think he got out very well from his standing start but he soon started motoring and eventually hit the front at the tail end of the race.

Race Winner on debut in 14.62 seconds.  Which looking on Power of 10 puts him in the top 65 in the country for his age group.

That time of 14.62 would have also won race 2 looking at the results from the day, so he performed fantastically.

MC and lady with the microphone for the day was Olympic 800m runner Jenny Meadows.  She sort of interviewed Clive after the race……. he has no idea what he said to her, LOL. #starstruck and #knackered

Onto my 100m.  I was in race 5.  My 100m PB of 12.64 was from way back last September as i’d only ran a 60m over the winter.  Coupled with this almost 2 months injury lay off I had nothing to go on form wise.  Still, the field looked strong from the PBs on show in this race of 5 people.  I was out in lane 7 so would be able to see everyone on my inside.

I’m a notoriously bad starter and don’t think I got out too well again.  I was a few people down before I started to pick up the pace.  As I reached halfway I had a GB vest on my inside in target.  Just had to stay relaxed and try to rein it in.  Sprint racing is funny.  The harder the try, the more you strain, the less power you put out.  So its finding that right balance of being relaxed but powerful.  Then line approached and I sort of dipped, but I was confident I had nicked the win.

I couldn’t see the electronic timer as it was obscured, but when Jenny Meadows announced to the crowd a win for Mick Wall I was chuffed.  But my main thought and reason for smiles was the hamstring remained intact.  As with Clive’s race Jenny thrust the microphone at me and asked for a few words.  As I was barely able to breath all I could blurt out was “doing it for Sheffield”. LOL. She congratulated me on the home town win.

I thought i’d ran well, but you never can tell in sprinting.  And it wasn’t until 20 mins later when I went to see the printout of the result that I knew i’d got a new PB.  So if its a new PB then it means its a new Striders Vets Track Record.

The PB was an unexpected bonus when I all wanted to do was ensure my hamstring was okay.  But i’ll happily take 12.64 > 12.48.  Although I really don’t think 100m is my race long term.  I just can’t start quick enough yet and against better opposition the race could be lost before its begun.

After our 100m races Striders were two wins from two races.  We sat around on the grassy knoll and ate some lunch and chatted to other athletes.  This is what is very hard to put across about masters/vets running, everyone is so supportive and friendly.  Yes, people run hard, but I’ve not yet met any athletes at these events that won’t have a chat with you and impart nuggets of information.  That includes various British, European and World champions and record holders.  I’ve talked to them all.

We also took the opportunity to go grab a photo with Jenny Meadows.  So off Clive and I took ourselves. 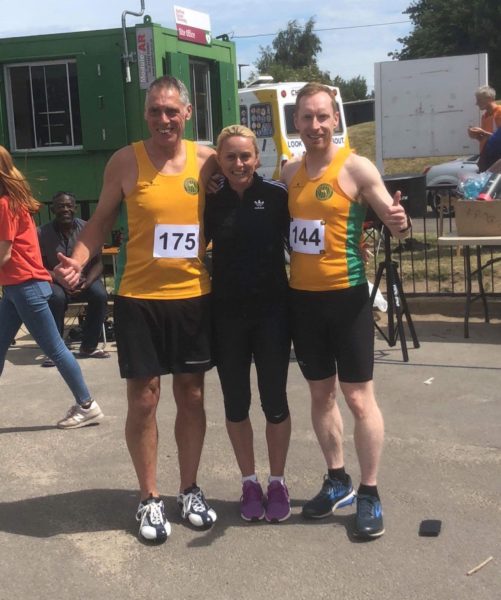 Lunch break over and onto the 200m.  We’d had around 90 mins between races, which ‘should’ be enough to clear the legs.  Again, as Clive had no previous race time he was up first.  No i’m not sure if the long break went against him or his warmup wasn’t sufficient but sadly 50m into the race he pulled up with a hamstring niggle.  I was (and still am) absolutely GUTTED for him.  He has been running fantastically lately and I was convinced he was going to run another great time on the track.  Fingers crossed he heals quickly and gets back out here as i’m certain there is more to come from him.

Race 5 again for me and looking at the PBs on show from the other 6 runners I knew I was in for a rough ride.  My PB of 25.40 came indoors at EIS in December.  I’d only ran one other 200m this year and that was when it was blowing a gale at Doncaster in March.  Again, my only thought was to get to the end undamaged.

Copped for lane 7 on the outside of everyone again and fell out of the blocks again. Most of the field had swooped past me on the bend and it was mission impossible coming off the bend as most seemed away and gone.  But I do get strong coming off the bend and tried to catch the nearest guy I could see.  Inch by inch I was catching but it wasn’t enough as my legs were heavy and full of junk from the 100m.  That 90 mins break obviously wasn’t long enough.  I crossed the line in 5th pace from 6 but the winner had won in 23.84 which was super fast, so the talk was maybe we’d all been dragged along too.

I fell to the floor poleaxed, barely able to move when I heard Jenny Meadows shouting my name.  I mustered a wave despite being out on my back.  I like her style of MC, LOL.

I think the way the organisers set up the races by previous time rather than just age was a masterstroke.  I made for some hugely competitive racing on the day and gave you people to chase.  I doubt I would have posted the times I did if I hadn’t had someone to chase in both races.

The biggest positive from the result is that according to Power of 10, that 25.06 is currently 11th fastest 200m from a V45 in the country this year…… this certainly gives the confidence and ego a boost, especially coming off an injury break.

How low can I get these times though?  I don’t know. I know deep down I need to find another 0.5 – 1.0 secs from somewhere to be truly competitive at the sharp end and ultimately this is my goal.  Aside from the 8 week layoff training has been going well and I think i’m coming up with a little regime that is working for me and fits around my available time.  Hopefully I can continue to perform well through the summer and still fit and healthy.  I’m under no illusions that the PBs will eventually stop, they always do in running.  You just need to keep working hard in training, take adequate recovery and find the set of workouts that work for you and stay injury free. Sound familiar regardless of race distance?

There is also the skill of race craft.  How best to run a 200m?  Well after doing it a few times I don’t think falling out of the blocks is the way to do it, so I think I need to try something new next time.

Next stop, an open track meeting at Woodbourn Road on Wednesday 4th July.  Cheap as chips to enter, so hopefully see some of you there.

Full meeting results and nationwide ranking available via Power of 10.