Another Peggster travel production, this weekend was always going to be a classic.

In true Peggster style, it all went extremely smoothly and great fun was had by all,(well Rich and me – and Stuart Jones, except he decided against the fell race) – probably a sensible choice.

Anyway, the Nationals. Well what can be said other than, what a great set of races. 1100+ women all setting off at once in a long straight line and narrowing as they climb the first hill. It is an awesome sight. The men had over 2300 entrants which led to quite a bit of congestion, shuffling and elbows at the beginning as the course narrowed, climbed and wound round some corners. There was mud and adverse camber on the first hairpin which led to a number of fallers. As Stu had put it earlier on, it was a choice of inside line and extreme mud or outside line, adverse camber and a chance of slipping, sliding and falling. On my first lap I took the latter choice, kept my feet (just) then decide to take the inside line on the next 2 laps.

The conditions were good. Cold, crisp but clear blue skies. Choices, choices about running attire. Base layer or not? Just vest? Hat? Gloves? Buff? I think I covered every base but ended the race with pockets bulging with gloves, hat and a buff. I’m so nesh at the beginning of a race and then regretting my kit choice halfway round. Maybe just the vest was the right choice but I couldn’t bring myself to start in vest only. I was just too cold.

Of the 1113 women runners, sadly we could only muster 2 entrants. This is a great event and I highly recommend people having a go at this. If there was a boycott due to the controversy regarding women and men running different distances, people may be pleased to know that EA were offering questionnaires out for completion in order to ascertain the views of the general runner. Hopefully, next year, there will be parity in the distances run at XC for both women and men.

The women’ 8k race was won by Phoebe Law of Kingston AC in 28.33. Well done to both participating female Striders. Sadly, there were not enough participants to get a team score

The men’s race 12k was won by Adam Hickey on Southend on Sea AC in 39.35. Again, well done to all the participating Striders. The Striders’ men team finished in 117th place out of the field of 162 teams.

Overall, it was a great weekend and a definite in next year’s calendar. Strong rumours suggest that next year’s Nationals will be at Harewood House near Leeds so hopefully we will be able to put out a stronger team. 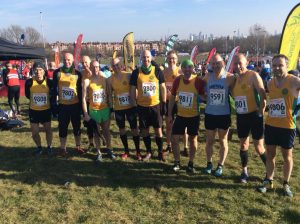