City marathons don’t seem to know whether they’re coming or going at the moment. Chesterfield only lasted a couple of years. Big new arrival Birmingham was so disappointing last year that it’s been put on hold while the organisers go away and think about what they’ve done. Nottingham had a better run, but this year’s has been cancelled. And Cardiff was due to launch this year but never quite materialised.

Fortunately for those of us hoping to do Cardiff, there was a close substitute starting up in Newport. With a flat course designed by Olympian and 2:10 marathoner Steve Brace, this could be a late spring alternative to Manchester for those chasing a time. Having attracted ~3500 for the marathon plus ~2500 for the associated 10k, hopefully the Newport Marathon is here to stay.

There were a few logistical teething problems, including a 30 minute delay to the start due to traffic problems. However, it gets a big tick for being the first of the ~50 races that I’ve done that comfortably had enough toilets, which as we all know can make or break an event.

The bag drop was on the ground floor of a brutalist multi-storey car park. With stripped-off runners sheltering from the chilly weather this effectively became the event centre for many. Initially this seemed a bit grim, but actually having an indoor tarmac track to warm up on before facing the cold was ideal. Add a few chairs and/or crash-mats for after the race and it would have been perfect.

Also, as a special treat for data geeks—and every marathoner should be a data geek—runners using the event park and ride got to park at the Office for National Statistics. What more inspiration could you need to hit your target splits?

Not all inspiration is helpful. When I’d entered I’d been confident of a sub-3. I was now planning on setting off slower than that. I was hoping to be around my 3:02:19 PB while making sure of a sub-3:05 to give me a chance of a London GFA place next year under the new, tighter criteria. However, my white number based on the time I’d given when I entered put me in the start pen at the front of the race, with the 3:00 pacer and the dozens of new friends he’d just made eagerly waiting at the front of the pen behind me. I felt like a bit of a fraud. 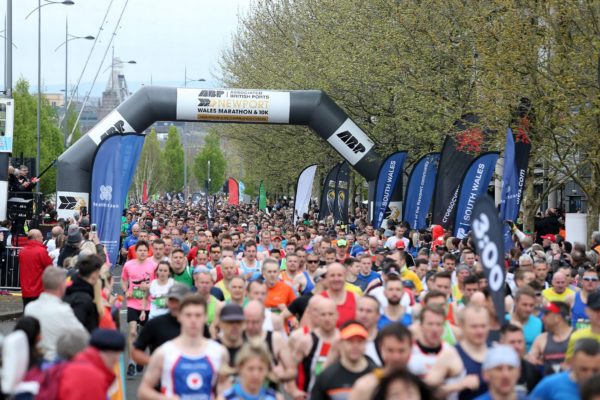 When the pace group passed me, I latched on, conscious of the colour of my number and telling myself that shelter from the wind would help and it might just work out. It didn’t.

I went through half way in 1:29:50, trying to ignore the fact that my heart rate was too high, my calves and hamstrings felt tight, and it was all just a bit harder than it should have been. Soon after that I dropped off the group, and then slowed and switched to survival mode. By 30k I wasn’t thinking about times any more; my only aim was to keep running rather than walking.

This is where marathons get brutal: I was fending off cramp in both legs, the best-case scenario was that I had about an hour to go, and even that seemed impossibly optimistic. Why was I doing this? Not for a PB. Not for a GFA. Those were both gone.

I settled into a pace that seemed sustainable for a couple of hundred metres with enough willpower, still around 4:50/km so not catastrophic, and for a kilometer, or 500m, or 100m at a time, ground this pace out to the end.

I eventually crossed the line in 3:07:34. I’m normally good at pacing myself, and think I know how the different stages of a marathon should feel. I was more than annoyed that I’d got so obsessed with staying in the pace group when I’d known it felt wrong from within the first 10k.

Checking the results later, the pacer ran 3:04. I might even have seen him at the finish if I’d let him go at the start.

Then again, having contemplated dropping out or taking a long walk home, 3:07 felt like a disaster averted, and pain is quickly forgotten. I can’t wait to have another go in the autumn.

Two runners who had better days than me were winners James Carpenter of Neath Harriers and Natasha Cockram of Micky Morris Racing Team, who ran 2:33:31 and 2:44:58 respectively.

I was the only Strider this year, but would recommend this race as one to consider if getting to South Wales isn’t too much hassle for you.