Race date Sat 8th Sept, report by Fran Cummins
20.5miles  2900ft climb
(There are no clubs on the results so have put on who I recognise, but I will have missed some people!)
Organised by Edale Moutain Resuce, this race always sells out weeks in advance.  There are options to walk, climb or run the route, with the runners setting off as a mass start.
The weather looked ominous on the morning, with rain forecast all day and there was a lot of debate on the start line whether to run with waterproofs on or not. I decided to take mine off just before the start, which turned out to be a good move as the rain cleared up for the next few hours and many runners were seen stripping off halfway up the climbs.
This year, there were 2 route changes (the race should have been renamed 7.5 edges)  as Derwent Edge was now not run on and only a small part of Stanage Edge was used.   The new start took you further along the reservoir edge, a short steep climb up to Bamford House and then dropped right back down to the waters edge before a steep climb up  to cross over Derwent Edge and descend into Moscar.  This new route kindly added on an extra 500ft of climb in the first 5 miles.
The second route change meant you couldn’t run along the top of Stanage edge and had to follow the footpath below it through the heather and bogs  – slightly more technical running than straight along the edge. A short climb up Long Causeway joined the main edge heading towards Burbage.
The rest of the route was the same as previous years, following the Edges of Burbage, Frogatt, Curbar, Baslow, Gardom’s and Birchen down to the Robin’s Hood pub at Baslow, where a free pint awaited.
There are no positions or club names on the results but first male was Michael Sprot in 2.42.10 and first female Zanthe Wray  in 2.52.42.
Steve Canning was the first strider home in 2nd place overall.  Paul Smith was first v50. 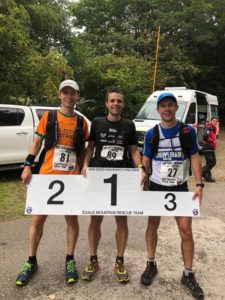