I love Parkrun. The distance suits me, not too long, not too short and it offers the bonus of meeting your mates and having a coffee and chat after. It has helped me to gauge my progress over the last 18 months following injury but Parkrun, fun though it is doesn’t give me a chance to race.

My knee is pretty well recovered after meniscus surgery so it was time to give it a test. The Northern Masters 5K Championship at the Brownlee Cycle Circuit, Adel, Leeds provides a flattish, (12m elevation) traffic free setting and I’d have the bonus of running as an FV65 instead of having to run against younger, leaner and fitter women. It is a measured one mile circuit which loops round and comes back on itself. The advantage is that you can check your pace each time you lap and test yourself against your own lap pace.

It was a small field today, perhaps 30 runners, mostly men and all Northern Masters. Luckily there were two other women of my age who I eyed up at the start. They looked like proper athletes to me as they went through their warm up routines with strides and stretches. I tried to grow a bit and look mean but I’m not sure it fooled anyone.

My strategy was to go off fast, find my pace in the first mile, burn off the opposition and settle to slightly less lung-busting pace once I’d shown them who was boss. It had worked well for me in the NMAC 10K Championships at Spen two weeks ago so was worth a go. It paid off. A 7:04 first mile, 7:18 second and 7:23 third meant I kept the lead and finished as I started, first in age group at 22:45 an average minute mile pace of 7:14, much my best in a while.

I’m glad I didn’t know until later that my two rivals were each British Masters 5K Champions in 2017 and 2018, respectively or I might have crept back into my shell, jogged round and conceded. As it turned out I beat the current British Masters F65 champion by a full minute and the 2017 champion by 75 seconds. Ed:- Brilliant result Dot!

Now for a beer. 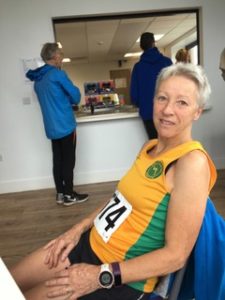 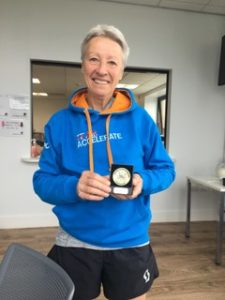