Because this isn’t a 10k race like many others. It’s half on road and half on steep, muddy, rocky trails. There’s cobbles. There’s a river crossing. And there’s more than 800ft of ascent. So with any idea of running a “time” completely out of the window, I had two aims in mind – firstly to finish faster than last year, and, secondly, to bag a top 10 finish, after being 13th woman last time round.

There are several brilliant things about the Burner. It’s cheap-ish at £13, it’s incredibly well organised, and the marshals are among the cheeriest I’ve ever encountered. Even better, it’s a fun day out for everyone, especially those who don’t fancy throwing themselves up and down hills for the best part of an hour. As the extended family busied themselves with winning chocolates, wine and toys, us runners gathered on the school field – and then we were off.

The route is punishing almost from the start, with a constant muscle-sapping uphill road climb. After three miles this levels out, before plunging around 400ft down into the valley bottom. It was at this point when I spotted the surprising sight of Alasdair, waiting for me at a water station. After pushing himself at the front of the field for a few miles, he’d decided it might be more fun to punish me up the hills instead. This meant that I had no option but to push it as hard as I could out of the valley, with him running a few paces ahead shouting at me to keep up, stop loitering, and give it some oomph.

The climb back up to Northowram village is tough, combining trail, cobbles and rocky paths. But I managed to keep my position, pushed onwards, and finished with a sprint for the line – crossing it in 53:26, two minutes faster than last year and side by side with Al. What I was really happy with, though, was finishing as fourth placed woman, and first V35. Podium finish next year? We’ll see. But first I need to do some serious training on those proper Yorkshire hills.

The Burner was won by Tom Collinge of Queensbury Running Club in 38:28, and first woman over the line was Stefanie Hopkins, of Stainland Lions, in 49:57. 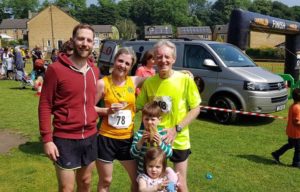