A just over half marathon race organised by Alnwick Harriers, that is so popular it has been known to sell out within hours of entries opening.

The race is run from the village of Beadnell on the North Sea coast and runs down to Alnmouth, a village on the same coastline.

The route involves much beach running as well as road, grassland, trail and hazardous rocky footpath; a tough race, with beautiful scenery.

I have spent the last few weeks of training worrying about the heat and blazing sun, but on the morning of the race we arrived in Beadnell to be greeted with a 40mph headwind and 80% chance of heavy rain. Organisers advised the wind as ‘chewy’!

Runners all head down the slipway onto the beach to start where I met Striders legend Alastair Lawson, there was some mustering and then we were off along the sand and through the surf!

Alastair and I ran together for the first 8/9 miles until he realised that the rain was chilling him through, so he sped up and made for the finish.

Coming into the final village I recognised the tarmac hill which goes on for about a mile before dropping back onto the sand for the final 1.5 miles to the finish. The finish was quiet as the weather was getting worse and runners grabbed their finishers tops and headed for the shelter of their cars or a local pub! 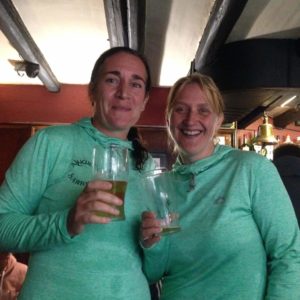