The Old County Tops Fell Race starts in Langdale and summits Helvellyn, Scafell Pike and Coniston Old Man. Organised by the Achilli Ratti Climbing Club, competitors run in pairs and cover around 37 miles with 10,000ft of ascent with the menacing tagline of ‘dependent upon which route you choose’.

After setting up base camp in Langdale we retired to the pub for a sensible few pints and a look at the route map, where we shared a table with a couple of climbers. I was amazed that a couple of people who planned to hang off a sheer rock face all day thought what we were doing was crazy.

Despite registering early- so early we were given number 1, it was still a mad rush to get to the start in time and the day was looking like a spectacle of blue skies and sunshine. In keeping with fell tradition the race was started by a man shouting ‘GO!’ and we all set off towards Grasmere and the ascent of Helvellyn. It was at this point Simon told me he had forgotten his hip flask, and the morning started to go weird. I don’t know whether it was the heat, the cold bug I was trying to hide, the weight of a full pack, the lack of whiskey or a combination of everything but I felt like I was moving backwards up Helvellyn. I tried to eat, but just couldn’t really manage anything, a theme which stayed with me for the majority of the day. We began haemorrhaging places on the ascent and I tried desperately not to panic. After a long trudge up from Grasmere, at the welcoming sight of Grisedale Tarn the weirdness lifted and I suddenly came over with fresh energy and I started to feel much better. Thank god!

We continued up to summit Helvellyn and set off on the fun tussocky descent towards the next check point. After trying to eat the driest jam sandwich that has ever existed and a massive glug of squash we began to take back some places, it felt great passing people, and we were starting to really enjoy being number 1- the extra cheers from marshals, supporters and walkers was ace.

The climb up to Scafell Pike involved passing through an area on the map ominously called ‘The Bog’ which was really nothing compared to some of the peak district bogs this winter! Upon arrival at Angle Tarn (with extra cheers for number 1!) there was a runner looking a bit poorly- a stark reminder of the scale of the challenge we were undertaking in the hot conditions. A marshal kindly filled up my camelback to the brim despite my protests of it being too heavy! It was so amazing, those marshals had carried gallon upon gallon of water up there for us all. Very humbling. 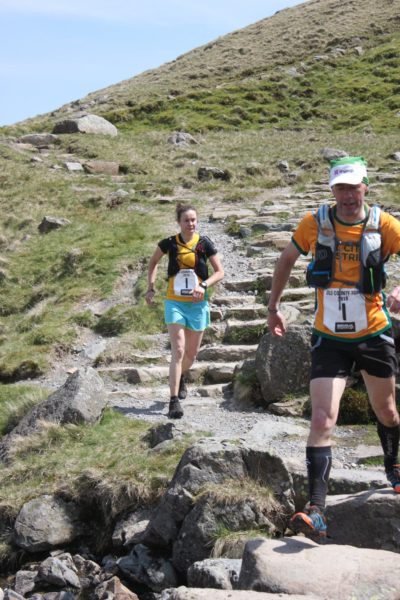 After summiting Scafell Pike (with hushed exchanges between passing walkers saying to each other ‘they’re number 1’) the descent was tricky and we didn’t take the best line.  The atmosphere changed from one of competition between the runners around us to one of a team working to get everyone down safely and we descended into one of the most breathtakingly beautiful valleys I have ever been in in the Lake District. Deserted apart from us runners it was like something out of a film set, so beautiful it was difficult to believe it was real. I gave a glance back at the crags where the distant runners, picking their lines down, looked like water droplets trickling through the rock into the valley below. We ran through the valley amusingly ticking off miles with team number 2, passed through the checkpoint and up the ascent towards Coniston Old Man. 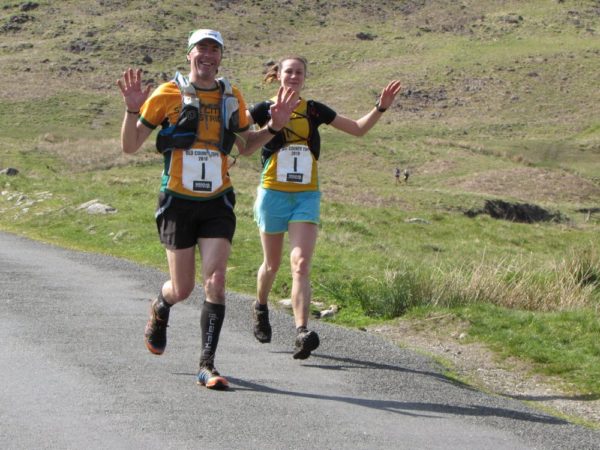 This was tough but the last big climb and we knew it. Coniston Old Man was the only out and back section of the route and it was great to cheer those coming down from the summit, the support at the top was brilliant. To think those marshals had been there all day the energy they welcomed us with was enviable- hooray it’s NUMBER 1!!! I managed a few haribo tangfastics which were mind-blowingly good and we headed off on the final descent back to Langdale, giving support to those behind us on their way up.

We ran into the finish area in 10hours 53min to a very welcome cheer, immediately tucking into possibly the best lentil soup I have ever tasted and discussed how on earth the winners Ricky Lightfoot and Bob Jebb had covered that ground with a new course record of 6hr 21min, breaking a record that has stood since 1989.

After a shower it was straight back to the pub for fish, chips and beer. I’m still buzzing 4 days later after covering one of the most spectacular routes I’ve ever been lucky enough to run in The Lakes, and will definitely be back next year without a doubt. Who’s in? 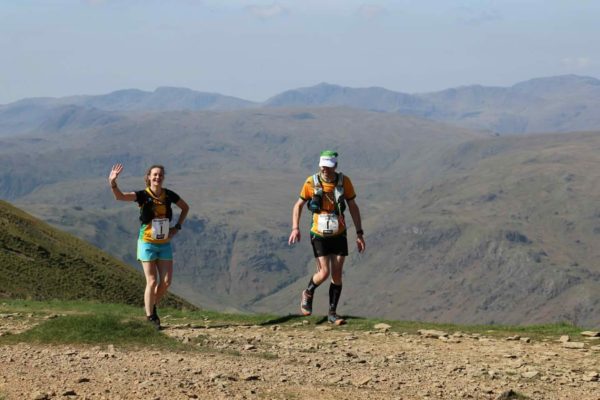