Taking place at the Osberton horse trials and being organised by the Worksop Harriers, the Osberton Chase 10k is billed as an approximately 10k off road race starting in the grounds of the beautiful Osberton Estate. It was an undulating, mixed terrain race with plenty to keep you interested.

There is also a canicross event which takes place at the same time.

Only 108 entrants on what was a calm, clear Sunday morning saw a civilised mass start at just after 10am. The course was mainly on grass and compacted trail and it was certainly ‘undulating’. It ran along side some of the equestrian cross country jumps which were very impressive.

I think I was the lone strider coming in on the slightly short course with a time of 57.51. We then had entry into the horse trails for the rest of the day where I watched some world class show-jumping in the main arena.

Male winner was Bryan Cherry of Worksop Harriers in 41.56, 1st Female was Hayley Gill of Matlock AC in 44.13. 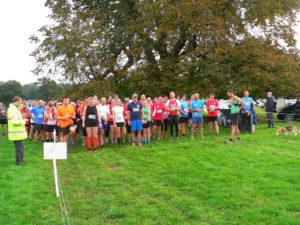