Like many other Striders, an April Marathon is looming and a late February half seemed a good opportunity to test pace and fitness. Having grown up with an admiration towards all things motor racing I was keen to enjoy a few laps around Oulton Park, albeit at a much slower pace that I would have preferred!

The race comprises of six laps of the circuit with free parking in the paddock enclosure and plenty of shelter in the garages prior to the start. The track is wide, with plenty of room to pass people (or in my case, allow people past)! Having ‘driven’ Oulton Park as a child on many video games, I was surprised to find an unexpectedly steep hill I hadn’t planned for.

I joined the club in December and highly recommend attending the Woodburn Road speed sessions on a Thursday evening to those looking to reduce their race times. Peter and the group are terrifically supportive despite my relative snail-like pace and having run with them for a little under two months I’ve already shaved five minutes off my previous HM time in November.

I’ve learned every time you think you are improving as a runner, something happens to remind you that things can still get better: I was running with a lady who took a toilet break on lap two, costing her a number of minutes and falling significantly behind. As I approached the final corner four laps later she charged past me, looking ready to start another lap.

The overall winner was Matthew Shaw of Salford Harriers in 1:12:23 finishing a whopping six minutes ahead of the second-place finisher.  The first woman home (and an impressive 4th overall in the race) was Gemma Connolly in 1:19:00.

The full results are here and there were two Striders in the field of 519 runners: 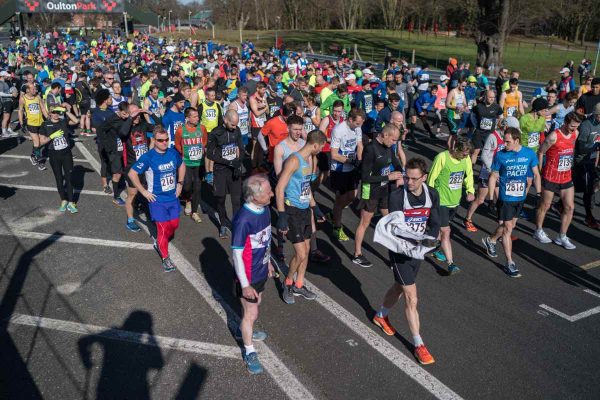