With any event on a race course, the level of enjoyment hinges on the weather. Like Silverstone, Oulton Park is open and exposed to all the elements. Even though the sun was being shy, we were lucky that wind and rain were kept at bay. I was down to race both the Sprint (morning) and Standard (afternoon), but a friends wedding reception meant I had to be back in Sheffield for 2pm…thankfully!

This was my second race here this season, with the half marathon back in February. So I had a good idea of the ascents, descents and the camber. Outlon Sprint Duathlon was a 2019 ITU World Championships qualifier, so the standard was very high for this course. The race was a 4.25km track running 1 lap, cycling 5 then running 1 to finish.
After the safety briefing we made our way to the start line…then off we went! Trying to keep up with the field I was running close to 6 minute per mile, but slowly fell back closer to 7 minute per mile. More than half the field were ahead of me and the realisation that I may not qualify for next years world championship set in (*Please note I am joking, I never thought I would qualify).

I made my way into transition in a decent 18m30s and found my bike. Here I hoped to make up some ground and that I did. Speeding round I felt invincible over taking 1, 2, then 3 other athletes. After a couple laps of this smooth undulating and bendy course I was feeling good, up until the leading pack of world qualifying hopefuls lapped me. It was about Lap 3 and 4 that this pleasant course became a bit tricky. With the slower athletes being caught up by the middle athletes, who in turn had been caught by the top athletes. Going around a tight corner with 50 cyclists of varying ability was scary, especially for a guy who doesn’t like cycling in a group.

I survived that near death experience and finished the bike in 39m50s, hitting my sub 40m target. Happy with that I started the run….just as the winner was coming in. Shaking off the fatigue in my quads I set off with a few people running at a similar pace, slowly catching a few people in front. With each over take came another burst of energy. Coming up to the final bend I dug deep and whipped out the classic sprint finish, crossing the line in 18m13s.

Wondering what could have been after a long season of fundraising events and weight gain due to pregnancy (yes guys put on weight during pregnancy too), maybe 2020 could be my year instead. Or maybe not with impending parenthood.

A 90 minute drive to Outlon Park is reasonable for the event. It’s a fairly quick course and spectators can see most of the action in the grassy area at the centre of the track. It’s a well run XtraMile Event with everything clearly communicated and sign posted. 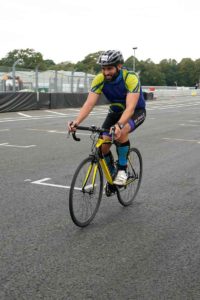