The Owston Ferry 10K is a low-key, well organised event in a village between Doncaster and Scunthorpe.

A pancake flat route, many turn up to the event with high hopes of a decent time, myself included.

However, I unfortunately was disappointed with my performance as I suspect many others were. Battling 25C heat and running on roads through wind and sun exposed fields meant that a personal best performance was just not feasible.

I was very impressed with the additional efforts race volunteers and organisers had made to help runners through the heat. They set up an extra water station and also had a cold-sponge station at around 6.5K. I was going through a bad patch at this point and being able to cool myself down helped me to resist thoughts of dropping out.

Opened water bottles were also handed out rather than cups, meaning runners could carry water with them for a little while. Every little helps when there’s no escape from the sun!

There was no support on route until runners returned to the village of Owston Ferry due to the nature of the course.

Mentally this meant remaining focused on lonely, flat roads whilst trying not to expend too much energy thinking about how warm you were was tough. However, once runners passed the very welcome village sign at around 8.5K supporters had placed themselves in different spots around the course.

This was the encouragement I needed to lift my pace as much I could and get through to the finish. The finish was on a grass field which I’m not a massive fan of – you really notice the difference in terrain when you’re flagging and it’s not pleasant running an extra loop round a field in view of the finish line when you’re done for – but it was pleasant for spectators and children.

And (most importantly!) there was a nice selection of cakes to choose from afterwards.

Despite disappointment with my time I am pleased that I managed to resist those thoughts of dropping out and pretty much maintained my position after settling in to the race at around 1K, finishing 5th lady overall.

257 people completed the race.  The  first man home was John Birch of Hallamshire Harriers in 34.10 and the first lady home was Gill Hoole of Scunthorpe and District AC in 41.26.

This race is great if you’re looking for a well-organised, friendly club event and in cooler, non-windy conditions it could have personal best potential. However, don’t be fooled by the flat as in July the race is always likely to be warm – you might be better personal best hunting elsewhere. 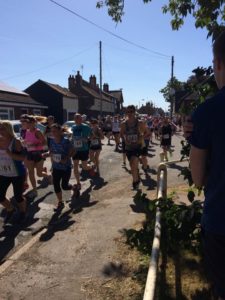