This was a Mr and Mrs affair with, unless any other Striders were running incognito, only Caroline and me in Green and Gold. The race is flat but a twisty, turny affair with some bottlenecks early in the race. The course takes in many Oxford landmarks on closed roads in the city centre before veering into the university parks for the last three kilometres. Each year the race is run to raise awareness and funds for muscular dystrophy and runners are encouraged to wear orange (also the colour of the race tee… but we chose gold, naturally) The winner of the men’s race was Noah Hurton of OUCCC in a time of 32.05 and the women’s race was won by Charlie Arnell of Today AC in a time of 36.05. I came in at 41.50 and Caroline, running with our Hallamshire daughter, finished in 52.07… and not a gown in sight. For those of you who are interested, the race is part of a series: runs in Cambridge and Leicester in October and March. 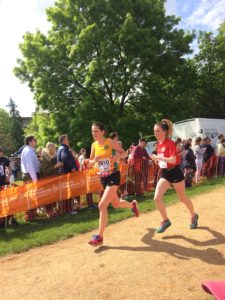