The Paras’10 is a 10 mile endurance race based on The Parachute Regiment’s 10 mile selection test at the end of training. During test week, recruits are assessed and scored across 8 separate events. The 10 mile march is the first event and is conducted over undulating terrain with each person carrying a bergen weighing 35lbs plus water and a weapon. The march must be completed in 1 hour 50 minutes and it is this event that forms the basis of the Paras’10 race.

The race is held at Catterick and Aldershot garrisons in support of the ‘Support our Paras’ charity and is regarded as the ultimate 10 mile endurance race. For those who’s idea of fun does not include the carrying of a 35lb bergen over 10 miles of undulating terrain, then a simple race can also be undertaken.

Three Striders found their way down South to attend the event, with Jordan Moat and David Perkins being foolhardy enough to carry the pack and Emma Beer settling for the more traditional race. Their results are below, and full results can be found here and  here.

For anyone that’s interested, it is possible to run 10 miles with a big pack on your back in a time of 01:25:19, which is what Zachery Ingledew of the 8 Paratroop Field Company did. First lady was Samantha Effemey in 01:42:57. 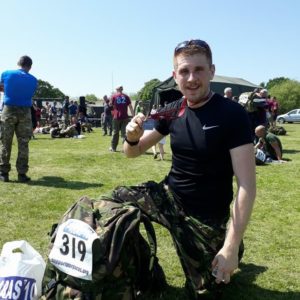