The Peak Rail 7 is a new and (locally) unique event hosted by Matlock Athletic Club in conjunction with Peak Rail – a race in which runners are challenged to beat the steam hauled heritage rail service from Peak Rail Rowsley South station to Matlock Riverside station and back in the beautiful setting of the Derbyshire Dales. The scenic 7 mile course sees runners racing on the new section of the White Peak Loop which runs from Rowsley to Matlock, and the close proximity of the Peak Rail track to the course will give supporters on the train (which takes approximately 52 minutes to complete its journey) a number of photograph opportunities and be able to cheer support as they pass. The course is almost exclusively off-road apart from a small section heading in to Matlock.

Whilst a number of Striders were on the starting list, just one took on the challenge to beat the train. Nick Booker ran a 48:01 to successfully beat the train. In Nick’s words…

What can I say about this race, a potential great day being a train geek! Running against a steam train and horrendous snow and flash floods from Rowsley to Matlock 7 miles. Consequently the weather did not dampen the atmosphere of the runners and the supporters on the train.

Race winner was Kristian Watson of Sutton in Ashfield Harriers in a time of 41:34 and first lady was Ruth Keeley of Belper Harriers in 48:19. Nick Booker coasted to an overall 17th, but second in his age category. Well done Nick! 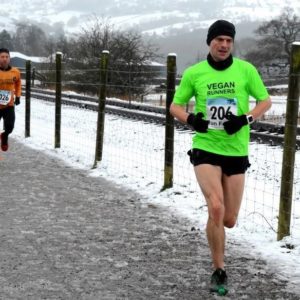 The only photograph to be found of Nick on the route (left, in gold and green), but it does show the conditions in which he ran in!